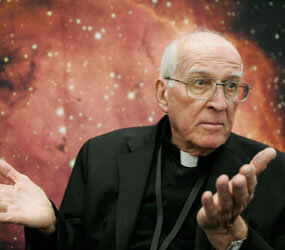 WASHINGTON – Veteran astronomer Jesuit Father George V. Coyne, a Baltimore native, was honored by the American Astronomical Society for his work in building a Vatican-sponsored summer school for young astronomers and promoting discussions on the intersection of religion and science.

Father Coyne, retired director of the Vatican Observatory, received the George Van Biesbroeck Prize at the opening of the society’s 215th general meeting Jan. 4 in Washington. The honor included a citation and a cash prize.

Father Coyne was a member of the Class of 1951 at what is now Loyola Blakefield. Before earning a Licentiate in Sacred Theology from Woodstock College and his ordination, Father Coyne earned an undergraduate degree from Fordham University and a doctorate in astronomy from Georgetown University.

In presenting the honor, society president John Huchra cited Father Coyne’s work with the Vatican Observatory Summer School, which brings 25 graduate students to the observatory’s headquarters in Castel Gandolfo, Italy, every two years for a month of intensive research.

Huchra also said Father Coyne’s efforts to bring scientists and religious leaders together to discuss the intersection of religion and science has led to greater understanding in both fields.

Father Coyne, who turns 77 Jan. 19, continues to shape the work of the observatory as president of the Vatican Observatory Foundation, which raises funds and develops awareness of the research undertaken by the church’s team of a dozen astronomers.

“The prize means a lot to me personally,” Father Coyne told Catholic News Service. “It recognizes the Vatican Observatory as a research institute.”

Since beginning in 1986, the school has welcomed students from 60 nations, with nearly two-thirds of them from developing countries, Father Coyne said. Nearly half – 46 percent – have been women, he said.

“The other initiative is the science-religion dialogue,” he said. “Our (observatory) staff is very peculiar in the sense that we’re professional astronomers number one, but we’re also Jesuits trained in philosophy and theology. I think we can make a unique contribution to this dialogue.”

Father Coyne said he may not have pursued his interest in the heavens had it not been for his teacher of Latin and Greek at the Jesuit novitiate in Wernersville, Pa.

Father Coyne recalled how the teacher, Jesuit Father Hayne Martin, occasionally would get sidetracked in class and start discussing the uniqueness of astronomical events, such as the first day of spring or an upcoming lunar eclipse. The stories kept the priest-to-be sitting on the edge of his chair.

When Father Martin realized what really excited his young student, he arranged for him to borrow astronomy books from the public library in nearby Reading, Pa. Armed with a flashlight – reading books that were not part of the official curriculum was against the novitiate’s rules – Father Coyne would feed his thirst for knowledge about the stars under a blanket deep into the night.

He eventually received a doctorate in astronomy. His research has involved stars with extended atmospheres, stars whose brightness varies over time and small spiral galaxies with unusually bright starlike centers.

Father Coyne was not sure what he will do with the cash from the prize, but he said it’s a good bet that it will end up supporting the summer school.