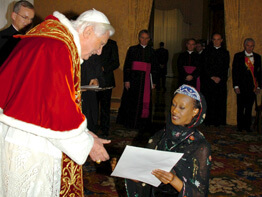 VATICAN CITY (CNS) — At first glance, the ambassadors accredited to the Vatican seem to be a group of elegant, older men gracefully ending their diplomatic careers in a posting filled with pomp and circumstance.

The suits with tails, the swords, the plumed hats, sashes and medals highlight the formality of public occasions and the long tradition of nations sending envoys to the Vatican, said Giovanni Galassi, dean of the Vatican diplomatic corps and San Marino’s ambassador to the Holy See.

“But we also must have something real to say; we must serve the world in some way,” Galassi said Jan. 3, the 20th anniversary of the day he presented his credentials as ambassador to Pope John Paul II.

Galassi was not thinking about his anniversary — “Frankly, I forgot” — but was busy writing the speeches he was to give Jan. 8 on behalf of the diplomatic corps to Pope Benedict XVI and to Cardinal Tarcisio Bertone, Vatican secretary of state.

The early January date for the pope’s speech to the diplomatic corps and the formal dinner for the secretary of state that evening mark the one time of year when almost all of the 175 ambassadors and four special representatives gather together.

Galassi arrived at the Vatican in 1980, serving as San Marino’s representative until being named ambassador when his country and the Vatican established full diplomatic relations in 1986.

In 1980, he said, the Vatican exchanged ambassadors with just over 90 countries.

By the end of 2002, the number had increased to 174, thanks particularly to the new nations and the newly democratic nations in Eastern Europe. But the expansion of the diplomatic corps also was due to the upgrading of relations with the United States and Israel.

After a decade in which new diplomatic ties were frequently announced, the number stayed at 174 from 2003 until the very end of 2006, when the Vatican and Montenegro announced Dec. 16 that they would exchange ambassadors.

Galassi said that when he arrived at the Vatican fewer than 45 of the ambassadors lived full-time in Rome.

Even today, about 70 countries have ambassadors living outside Italy, serving both as ambassador to the Vatican and to another European country or European-based U.N. agency.

Still, that leaves more than 100 ambassadors in Rome full time, and Galassi said they do more than invite each other to receptions, although there are plenty of those as well.

“Many of the ambassadors host debates and cultural and artistic events to present the richness of their countries,” he said. “Also, groups of ambassadors meet regularly for philosophical and religious discussions with the help of a few monsignors. These are an enrichment for each one of us.”

Diplomatic service at the Vatican is unique, he said.

“We are not called by our governments to work on economic agreements or commercial treaties, but to share our concerns for the human person,” he said.

“I do not engage in negotiations for weapons consignments, but for improving the lot of the human person, promoting social justice, solidarity and love,” Galassi said.

The ambassador said being dean of the diplomatic corps “is a great satisfaction,” particularly because of the kind of people countries tend to nominate as their Vatican ambassadors.

Galassi is a surgeon and, while serving as ambassador, taught surgery in Rome until reaching the mandatory retirement age of 69 in 2005.

“Many of the ambassadors to the Vatican are not career diplomats, but personalities in their own country. Most have a high level of education and culture,” he said.

One of the newest ambassadors, Princess Elizabeth Bagaya of Uganda, is a lawyer and the granddaughter of King Kasagama Kyebambe IV, the first Ugandan king to be baptized a Christian.

In the 1960s and ’70s, she worked as a model and actress, then became active in Uganda’s National Resistance Movement.

When she presented her letters of credential to Pope Benedict in mid-December, she told him that “following in the footsteps” of her grandfather she hoped to protect and strengthen the contributions Christians have made to her country.

Close to 20 ambassadors began their service at the Vatican in 2005. Like the princess, a half dozen of them earned their university degrees in law, but there also were several who studied literature.