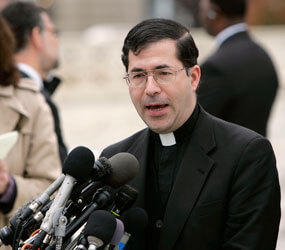 Note: This article has been updated throughout.

The bishop of Amarillo, Texas, has suspended Father Frank Pavone, national director of Priests for Life, from public ministry outside the Diocese of Amarillo, effective Sept. 13, and is calling him back to the diocese to spend time in prayer and reflection.

“My decision is the result of deep concerns regarding his stewardship of the finances of the Priests for Life (PFL) Organization,” Bishop Patrick J. Zurek said in a Sept. 9 letter to bishops of the United States. “The PFL has become a business that is quite lucrative which provides Father Pavone with financial independence from all legitimate ecclesiastical oversight.”

The bishop said that there have been persistent questions about millions of dollars in donations to PFL and an expectation by donors that the funds are used wisely. “Since he has consistently refused to subject the PFL to a transparent and complete auditing of all expenditures, I have reasons to be alarmed at the potential financial scandal that might arise if it were the result of my failure to correct Father Pavone’s incorrigible defiance to my legitimate authority as his bishop,” Bishop Zurek said.

Priests for Life is an international pro-life organization with offices, according to its website, in New York; Washington, D.C.; Amarillo; Chicago; Atlanta; Philadelphia; San Diego, Calif.; and Rome. However, the organization, based in Staten Island, N.Y., no longer maintains offices in Amarillo.

Father Pavone, who was originally ordained as a priest of the New York Archdiocese. Father Pavone was incardinated in the Amarillo Diocese in 2005 when Priests for Life moved some of its operations to the Texas panhandle city. Priests for Life was welcomed to Amarillo by now-retired Bishop John W. Yanta, who served on the organization’s board of advisers.

Father Pavone became the first member of the new Missionaries of the Gospel of Life the following year.

In 2008, a joint statement from Priests for Life and the Missionaries of the Gospel of Life said that they would be one entity, “without the founding of a canonically distinct community,” which would have been able to accept and ordain its own seminarians. At that time, Father Pavone said he would remain a priest of the Amarillo Diocese.

Father Pavone told Catholic News Service Sept. 13 from Birmingham, Ala., where he had been taping programs for Eternal Word Television Network for more than a week, that he planned to comply with Bishop Zurek’s request to return to Amarillo. Father Pavone said he was scheduled to leave Birmingham the afternoon of Sept. 13 and meet with Monsignor Harold Waldow, vicar for clergy in the Amarillo Diocese, immediately after his arrival.

“Bishop Zurek asked me to go back to the diocese today, which I am doing for a limited period of time,” Father Pavone said. “I am going there and my (priestly) faculties are fully intact and I’m in good standing.”

In the September 2011 letter to his brother bishops, Bishop Zurek said, “It seems that (Father Pavone’s) fame has caused him to see priestly obedience as an inconvenience to his unique status and an obstacle to the possible international scope of his ministry. I would venture to say that the supreme importance that he attributes to his PFL ministry and the reductionist attitude toward the diocesan priesthood has inflated his ego with a sense of self-importance and self-determination.”

He said calling Father Pavone to return to the diocese for reflection was part of the bishop’s desire for the priest to “readjust his priestly bearing through spiritual and theological renewal,” and that he further hoped to strengthen Father Pavone’s ability to live authentically the gift and mystery of his priesthood.

Bishop Zurek discouraged contributions to Priests for Life until these matters are resolved. “If you judged it to be prudent,” he wrote to the bishops, “I would like to ask that you would inform the Christian faithful under your care to consider withholding donations to the PFL until the issues and concerns are settled.”

Archbishop Edwin F. O’Brien, apostolic administrator of the Archdiocese of Baltimore, said he has known Father Pavone for many years, having taught him as a student at St. Joseph Seminary in Dunwoodie, N.Y., before his ordination as a priest.

“I appreciate Bishop Patrick Zurek’s statement and would hope that Father Pavone would adhere fully to the requests of his bishop,” Archbishop O’Brien told The Catholic Review. ”Bishop Zurek has been so very patient and thorough in dealing with this matter over many months. I appreciate his decision and support it completely.”

A senior representative from Priests for Life was not available to comment by noon Sept. 13.

The day before the suspension was effective, a PFL email blast to supporters included a reflection from Leslie Palma-Simoncek, Priests for Life communications director, providing, “a glimpse of what it’s like working side by side with the world’s most well-known pro-life priest.”

In that reflection, Palma-Simoncek recounted the long days and extensive travel schedule the priest maintains in support of the pro-life cause. “At 52, Father Frank Pavone has the indefatigable stamina of a teenager. He draws this energy from his interactions with people, from cardinals to custodians,” she wrote.

She wrote, “Janet Morana, executive director of Priests for Life, recalled that when Father Frank became the national director of Priests for Life in 1993, ‘They gave him a check for $3,000 and said “go, defend life.” After that was gone, he blew through his entire savings, all the money he had saved since he was a teenager. He has never asked for it back. He never wanted it back.’ Father Frank has never drawn a salary as national director.”

According to CNS, records filed with the Internal Revenue Service show that the organization’s income topped $10.8 million in 2008, the latest year tax forms were available. In 2007, Priests for Life showed income of $9.2 million.

Contributing to this story was Dennis Sadowski of Catholic News Service in Washington.