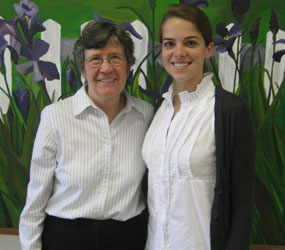 When Religious Sister of Mercy Carol Wheeler was teaching her introduction to philosophical thinking class during the 2004-2005 school year, she had many seniors who furthered discussion each day in the advanced, invitation-only course.

One – Dorothy Smith – caught her attention, and the sister became convinced the student would make “significant contributions” to the world.

It turns out, she was right.

Smith, who graduated from the school in 2005, recently became the first alumna to be named a Fulbright Scholar in Mercy’s 49-year history. The Parkville native recently graduated with a dual major in political science and Islamic civilization and society from Boston College.

The Fulbright Program was created by the late Senator J William Fulbright after World War II. It annually sends about 1,100 American scholars and professionals to more than 100 countries for academic lectures or research.

Smith will travel to Oman, an Arab country in southwest Asia, during the next year and conduct research on water conservation and awareness.

“I’ve always had kind of a passion for environmental issues and water scarcity is an important public policy issue in the Middle East,” she said.

The Middle East’s mixture of cultures, nationalities, religions and languages is a major draw for Smith.

Smith will study Arabic in Jordan for two months. As a college student, she studied in Cairo, Egypt, for a semester and then worked in Kuwait during one summer. She hopes her Fulbright experience will advance both her research experience and her conversational Arabic skills. She eventually would like to pursue a doctorate degree in environmental or public policy.

Smith’s political interest was first fostered at Mercy, where she served on the Student Council and as the head delegate for Model Organization of American States.

Few staff members could forget Smith’s contributions while she was away at Boston College. Now, it appears her legacy is about to grow even larger both home and abroad.

“We’ve graduated judges, entrepreneurs, educators and artists. Now a Fulbright Scholar joins our alumnae,” Sister Carol said. “It’s quite an achievement, particularly since her work will focus on the new field of water conservation.”