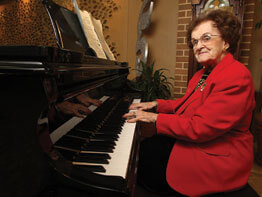 Several weeks ago, Alice Krohn spoke with a friend who was near death.

A 90-year-old resident of Charlestown Retirement Community, Mrs. Krohn confided to her companion, in her early 70s, that she was unsure why she had been able to live so long.

“Alice,” the friend said in hushed tones, “you have a mission.”

Mrs. Krohn was never told the specifics of that one mission, but she has carried out many during the various stages of her life. All of them, she promised on a late December afternoon, were done with equal fervor.

“I’m old, but I’m not elderly,” she cautioned inside her cozy apartment at Catonsville’s sprawling Charlestown complex.

Mrs. Krohn has worn many hats during her full life, including Roman Catholic, mother, daughter, volunteer and devoted wife who has been twice widowed. She’s been an author, businesswoman, piano lover, gourmet cook and unabashed romantic.

The parishioner of Our Lady of the Angels at Charlestown and St. Mark in Catonsville was honored Nov. 24 by Baltimore County with a service award during Good Neighbor Week, in recognition of her years of volunteering at St. Agnes Hospital in Baltimore.

For 40 years, she has volunteered there and served on various boards. She is co-chair of the Auxiliary’s capital campaign, and she plays piano there every Thursday for cancer patients.

At a ceremony, Baltimore County Executive Jim Smith said that Mrs. Krohn is “a constant presence at the hospital and loved by all who know her.”

Mrs. Krohn almost didn’t make the ceremony at the Towson Sheraton. When St. Agnes officials notified her she was receiving the award, she was unaware of its magnitude. She simply offered her thanks and said she needed to play piano for the residents of Charlestown.

“Well, we’ll pick you up,” Mrs. Krohn remembered them saying.

Her second husband, Mark Krohn, served as an administrator at the hospital for many years. During his time there, Mrs. Krohn felt compelled to pitch in as well.

“I was every officer but president,” she said. “I absolutely refused that because my husband was the administrator. It was a conflict of interest, you know.”

Mr. Krohn died 10 years ago, but she finds ways to remain connected to him. Even as staff changes at St. Agnes and fewer people remain from her husband’s days, she is a visible part of the scene.

She also drives to St. Mark every weekend for Mass, where she says she can feel Mr. Krohn with her in the pews.

“I work hard to keep his memory in people’s minds,” she promised.

“We have a real jewel,” said Mary Evans, Charlestown’s senior community service manager. “She’s a wonderful, wonderful person. The thing you feel is this overwhelming joy for life. She takes advantage of every opportunity.”

Around Charlestown, Mrs. Krohn acts as a goodwill ambassador who helps soothe fears of potential residents. Admirers say that she is an example of life moving perpetually forward.

“She really is a face of Charlestown,” said Brad Andrus, Charlestown’s director of philanthropy. “She’s always on her way to doing something.”