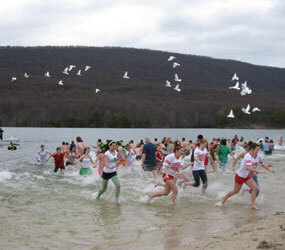 Richard Biancone Jr., a parishioner of Ss. Peter and Paul in Cumberland, went to Mass a year ago wearing a Hooley Plunge sweatshirt. A priest asked if he participated in the fundraiser for special needs people the previous day.

The Grand Scribe for the International Order of Alhambra Wamba Caravan 89 responded, “Father, it was a good day for Catholics.”

Another great day for the faith took place March 5 at Lake Habeeb in Rocky Gap State Park, where the seventh annual Hooley Plunge was organized again by Cumberland-based Wamba Caravan 89. The event raised approximately $100,000 from 678 participants, who jumped in the freezing lake. An estimated 5,000 people were in attendance.

“It’s the opportunity to get out there and live your faith and help for those who are less fortunate,” Biancone said.

The Hooley Plunge has raised nearly $300,000 over the years for Allegany County Special Olympics and other programs for the developmentally disabled.

The International Order of Alhambra order serves as a fraternal organization that helps preserve and commemorate historic Catholic sites, people and events. It also raises money to support developmentally disable children and adults.

Although it is based in Cumberland, Wamba Caravan 89 attracts members from West Virginia, Hagerstown and Frederick. With 172 members, it is believed to be the third largest caravan in the Alhambra order.

March is a busy month for the group, which also runs the Alhambra Catholic Invitational Tournament (see Page 14). The boys’ basketball tournament has raised thousands of dollars for special needs people through the years and has been a fixture for 51 years.

“If you grew up in Allegany County, you went to the ACIT,” Biancone said.