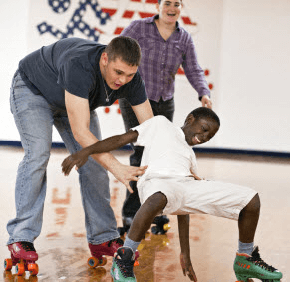 ODENTON – Skaters whizzed in long loops around the floor of Wheels Skating Center, a roller rink located off of Highway 175. Some were fearless on their wheels; others struggled to stay upright.

The Tuesday evening attracted skaters of all ages, some apparently regulars. Among the newbies were youths from Sarah’s House, a Catholic Charities of Baltimore supportive housing program, skating alongside airmen from nearby Fort George G. Meade.

Each month, Air Force volunteers accompany Sarah’s House teens on a fun outing, such as swimming, bowling or laser tag. The Nov. 20 skating event was attended by 10 youths, ages 11 to 17, and two airmen.

The point is simply for the youths to have a good time, said Staff Sgt. Elisa Smith, 33, who brought her own skates to the rink. She coordinates the events for the airmen along with Bruce Cloepin, volunteer resource manager at Sarah’s House. Past events have drawn as many as 14 airmen.

“Being a teenager in and of itself is tough enough, but to be a teenager at a shelter, where you may be sharing a room with your parents and your siblings, just makes for difficult circumstances,” Clopein said. “Anything we can do to help make the transition for the teenagers easier is time well spent.”

A 13-year-old Sarah’s House resident, who requested the Catholic Review not use her name, said the events were fun and an opportunity to meet new people. She has lived at Sarah’s House off and on with her mother and sister for five years, after her parents divorced.

Sarah’s House commemorated its 25th anniversary Oct. 19. A partnership between Catholic Charities and Fort Meade, the program’s site sits within the military installation’s boundaries, and is one of three shelters in the United States supported by the U.S. Army.

Colonel Edward Rothstein, garrison commander at Fort Meade, is supportive of the relationship between the installation and Catholic Charities, and praised it during an address at the anniversary celebration.

“When you put on the uniform you didn’t give up the citizenship” he told the Catholic Review. “To remind our service men and women about their citizenship, (service) opportunities are important.”

“I think it’s important for any teenager to have positive adult role models, particularly teens in these circumstances, which are less than stable at times,” he said. “It’s great that there’s someone they can count on, on a regular basis.”