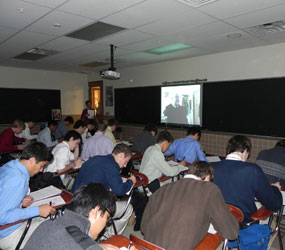 Instead, they saw him on a projection screen at the front of class. Brother James, a teacher with a 40-year career, was ready to Skype.

Skype is a software program that allows real-time video conferencing over the Internet through cameras attached to computers. Brother James, who is also the school’s president, uses his laptop from his home and connects to his classroom at Mount St. Joseph. Because there is a sound delay with Skype, Brother James conducts a real-time conference call with his students to sync the audio.

Nothing is going to keep Brother James from his students, as he uses Skype out of necessity.

Brother James is currently undergoing chemotherapy treatments for prostate cancer that has spread to the bone and liver. He was diagnosed last year. It is the second time he has had cancer, as treatment earlier beat his colon cancer.

“I’m a religious in a teaching community,” Brother James said. “I love it. I love every minute of it. I’m not the type of man to sit home and wait to be sick.”

Brother James hoped he would be in class full time, as he was during his first cancer battle.

Students weren’t prepared for the Skype lessons at first.

“I had no idea we had the technology to be able to do that,” junior Adam Gracia said. “It’s amazing.”

Added junior Dominick Ruggiero: “It was actually kind of weird at first.”

Brother James uses Skype on days he is recovering from chemotherapy, which has a three-week cycle. As it became obvious that he would be too frail on some days to teach in person, Brother James asked his school’s information technology staffers if there was a way to teach from home. The IT department introduced the concept of Skype.

“I was a little wary at first because I didn’t know what that meant and I’m not techno-savvy,” Brother James admitted.

The ability to see his students keeps them in line. If one of them nods off or yawns, Brother James can offer a stern reminder to keep focused.

“Really, it’s as if I’m in the classroom,” Brother James said.

He prides himself on a teaching style that is based on constant movement.

“I’m usually very animated and bouncing around the room,” Brother James said. “There are times I have to sit down, but I’ve never liked a teacher who sits down.”

Junior David Falvo said that when Brother James is teaching British Literature, “He’s very passionate. It’s one of my favorite subjects. He’s so energetic. He tells these stories and they’re all very rich in life lessons.”

Falvo said he never appreciated the works of William Shakespeare before Brother James’ class. Other students credit him with sharpening their writing skills.

Adds Falvo: “I find that every day that we have him is a gift.”

On Skype, the students see a more toned down Brother James.

“It’s kind of sad to see him sitting down,” Ruggiero said. “He’s got a hat on and some Gatorade next to him. I’m very proud of him. He’s a very strong man.”

Gracia said that even through illness, Brother James projects a love of teaching.

“I know it’s been hard for him, but he puts forth 100 percent every day, even when he’s having his worst days,” Gracia said.

Students say they have become emotionally involved in Brother James’ struggles. Each day, the school prays together for him. Brother James hears and feels those prayers.

“It’s all in God’s hands,” Brother James said. “The Mount St. Joseph community has been beyond my capacity to comprehend. The best thing I do every day is teach.”