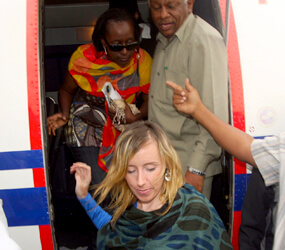 DUBLIN, Ireland – Irish Catholics observed World Mission Sunday Oct. 18 with prayers of hope for a kidnapped Irish priest, Columban Father Michael Sinnott, and prayers of thanks for the release of kidnapped aid workers in the Darfur region of Sudan.

Fear was rising over the health of Father Sinnott, kidnapped Oct. 11 from his order’s residence in Pagadian, Philippines, about 600 miles southeast of Manila. His Columban colleagues are concerned that without access to several types of heart medication the 79-year-old priest will become gravely ill.

Aid workers Sharon Commins, 32, of Dublin, and Hilda Kawuki, 42, of Uganda, were released early Oct. 18 after being held for 107 days by an armed gang in Darfur. The women work for the Irish aid agency Goal.

News of the women’s release offered additional hope to Father Sinnott’s family, said Picpus Father Eamon Aylward, a representative of the Irish Missionary Union. He celebrated a televised Mass marking World Mission Sunday and the work of nearly 2,000 Irish missionaries and countless lay aid workers serving in more than 80 countries around the world.

“In a particular way, we are offering this Mass today for the safe and speedy release from captivity of the Columban missionary Father Michael Sinnott, who is from Wexford,” Father Aylward said at the beginning of the Mass. “We rejoice also in the news this morning of the safe release of Goal worker Sharon Commins and her colleague Hilda, who were kidnapped in the Sudan in July.”

Speaking Oct. 19 during a telephone interview from the Sudanese capital, Khartoum, prior to a flight to Dublin, Commins told the newspaper Irish Catholic that she and Kawuki felt hopeless at many points during their ordeal.

“We went through some very, very dark hours, but we prayed and thought of our families,” she said. “When one of us was in really bad form the other would try to be more upbeat. We took that in turns. We just knew that there was no way our families and governments would allow this to continue.”

Throughout their captivity, prayers and Masses were offered across Ireland for the women’s safe release. The Irish Catholic Bishops’ Conference designated their 100th day of captivity, Oct. 11, as a special day of prayer for their release.

Commins thanked “the Irish public and the people all over the world praying for me and Hilda.” The prayers served as a source of support, both for herself and her family, she said.

“I really think that’s what got us out alive,” she said.

Goal chief executive John O’Shea greeted the captives’ release with “a sense of overwhelming relief and joy.” He said the women’s safe release was “like a miracle, an answer to prayers.”

Speaking about her release, Commins said: “It feels just unbelievable. It’s as if the past three and a half months have been like a dream. There was not one day that we weren’t fearful and extremely stressed, and it’s an amazing, amazing feeling to be finally free.”

Being released came as a surprise, Commins added.

“There was no indication at all, so when they told us we were going to be freed we just raised our eyes to heaven and said ‘Yeah, whatever,’ because they had on numerous occasions joked about it before,” she explained. “So at that point we didn’t trust anything they said.”