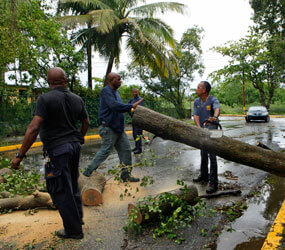 The massive storm pulled away from the Bahamas late Aug. 25, leaving the 700-island nation with flooding, downed power lines and felled trees. Although there were no immediate reports of deaths or injuries, many communities were isolated because of blocked or flooded roads.

“We haven’t been able to contact partners in the Bahamas, but we understand that the damage was expected to be worse in the outlying islands,” Cherry Araujo of the Antilles Episcopal Conference, which includes the Bahamas, told Catholic News Service. “We’re waiting to evaluate the damage.”

The country’s emergency workers told reporters that the full extent of the damage would not be known for days but that flooding and damage was widespread. National Emergency Management Agency officer Gayle Outten-Moncur said 90 percent of buildings on some outlying islands had been damaged.

Thousands were without power, the government said. Calls to parishes throughout the islands went unanswered or did not go through because telephone lines were down.

“It’s going to take a while for us to know how bad the damage was and how we’ll respond,” Araujo said. “It was obviously a big storm.”

Irene became the first hurricane of the 2011 Atlantic hurricane season as it moved from the smaller islands of the eastern Caribbean to the Greater Antilles. As it passed over the islands, it left a path of destruction.

At least one person drowned in Puerto Rico, officials said.

“This was an enormous storm. Even after it passed over the island, we were still feeling the effects, the rain and the wind, for days,” said Father Enrique Camacho, director of Caritas Puerto Rico.

The eye of the storm left Puerto Rico’s coast Aug. 22, but the island was still being battered by winds and heavy rains two days later, Father Camacho said.

“Because the storm was so large, it’s hard for us to know exactly how bad the damage is. We’re still assessing communities. When we find people who need assistance, we respond with supplies, like food rations,” he said.

Officially, a few hundred Puerto Ricans had taken refuge in government shelters, but Father Camacho expected the number of displaced people to be higher.

Aid workers went from town to town to evaluate the extent of the damage and distribute emergency supplies.

The storm skirted north of the island, but heavy rains – up to 10 inches in isolated areas – caused rivers to flood, leading to serious damage. At least four people died.

Caritas Dominicana officials continued to assess damage Aug. 25. A spokesman said the agency had prepared emergency supplies to respond to the flooding and displacement and that it was attempting to reach communities most in need of assistance.

In Haiti, the United Nations said that at least two people were killed and that farmland was flooded by the storm.

Runoff from heavy rain remained a particular concern in the area around the capital, Port-au-Prince, where nearly 600,000 earthquake survivors are still living in camps made up of tents and tarp shacks.

Aid workers expressed concern that the inundation would lead to a new outbreak of cholera, a disease that has killed nearly 6,000 and sickened hundreds of thousands more since October.