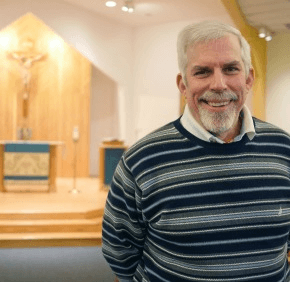 By Nancy Menefee Jackson
Special to the Review
Father James Kiesel, pastor of St. Joseph in Odenton, never expected to have a heart attack.
“It’s like that commercial,” he said. He was 58, fit and had low cholesterol. He watched his diet, cooked healthful foods and avoided red meat. But he was also in denial about the risks from his smoking, a habit he’d had since he was 16.
On Sept. 13, 2014, the priest finished celebrating 5 p.m. Mass and enjoyed a dinner out with seminarians. After dinner, he was relaxing and watching TV when he felt his chest getting tighter and tighter.
“I thought it was indigestion,” Father Kiesel said. He ignored it for a bit and then lay down – but it felt even worse. He called a parishioner who was a nurse and described his symptoms, which by then included tingling in his arm. She told him to hang up and call 911 immediately.
He did, “and then I couldn’t breathe,” he said.
He praises the 911 operator who kept telling him, “I’m with you” in the few minutes it took for the paramedics to arrive. With the siren wailing, the ambulance sped to Anne Arundel Medical Center, where doctors were waiting.
Father Kiesel had suffered an ST-segment elevation myocardial infarction, or STEMI, a serious heart attack in which the blood flow to an artery is completely blocked. He underwent an emergency angioplasty and a stent was placed in the artery.
While he was shocked at what was happening to him, during the crisis, Father Kiesel was not afraid of dying. “I prayed the Prayer of Simeon and said an Act of Contrition,” he remembered. At the hospital, Monsignor Jay O’Connor anointed him and “there was a peace and calmness afterward and the Lord was with me,” he recalled.
Afterward, he thought, “Death knocked on my door but I was not afraid of it – if this is what death is like, OK, I’m not afraid.”
His faith soon helped him with another struggle, giving up “two of my best friends, coffee and cigarettes.” He had tried numerous times before to quit smoking, but this time, “the doctor and the nurses put the fear of God into me.” He admits that as a priest he had felt somewhat invulnerable, feeling God would protect him. Now he turned to God. “Lord, I’m going through a tough time – get me over this hump of smoking.”
After a week in the hospital, Father Kiesel returned home for six weeks of no work. He was humbled by the outpouring of support from his parish, where he’d been for a year, and from his previous parish, Church of the Holy Apostles in Gambrills, which joined with St. Joseph last year.
“People ministered to me, and that was difficult for me,” he recalls with a laugh. “I’ve always been self-sufficient – ‘I can do it. I can do it.’ It was humbling to have people come to my home with chicken soup and meals. I was very moved by the generosity and love and support.”
He’s back to work, albeit slowly, and enjoying a chance to live life to the fullest. He plans to keep on doing what he loves – ministering – but he also says he’d love to be a pilot someday.
“I have a new lease on life,” he said, “a second chance. In all likelihood I should have been dead.”
Also see:
Writer Sister Mary Ann Walsh faces cancer again
How to keep your aging brain fit
Donor says helping her pastor was an easy decision
PrevNext