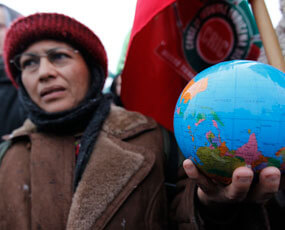 In the wake of what some describe as a tepid climate agreement in Copenhagen, Denmark, Catholic activists say church groups must focus on educating voters and lawmakers about climate science and policy.

Faith, economics and the environment are interconnected, Kathy McNeely of the Maryknoll Global Concerns Office, who was in Copenhagen for the first week of the U.N. Climate Change Conference, told Catholic News Service.

Education by church groups can “help people make the links between our economic system, which is focused on consumption to keep the economy going, and its impact on ecology,” said McNeely, who coordinates Maryknoll’s Faith-Economy-Ecology project.

The Copenhagen climate conference ended early Dec. 19 with an agreement that failed to satisfy most of the participating countries.

“I’m not happy about the way the process is going,” Safia Abbi of Cordaid Kenya, a Catholic development and aid agency, said Dec. 18. “I’m angry at the world leaders. I feel they have the power to act, but they are not acting.”

Nations already feeling the effects of climate change, such as islands threatened by rising sea levels and African countries suffering extensive droughts, fought for stiffer targets for the reduction of greenhouse gas emissions in industrialized countries.

They also called for measures that would limit global temperature increases to 1.5 degrees Celsius above the global temperature in the 1800s. Scientists say an increase of more than 2 degrees could be catastrophic. Above all, developing countries and activists at the meeting called for negotiators to sign a binding legal agreement.

Talks at the two-week conference were suspended twice, once when the island nation of Tuvalu pressed for stronger action, and again when African nations walked out over disagreements.

In the end, delegates agreed to “take note” of an accord that recommends taking steps to keep global warming below 2 degrees Celsius, but which sets no specific targets for emissions cuts or for the year by which emissions should peak and begin to decline. The accord was brokered in a last-minute meeting of leaders from the United States, South Africa, China, India and Brazil.

Under the 1997 Kyoto Protocol, which the United States did not sign, industrialized countries agreed to specific cuts in emissions of greenhouse gases, which create the atmospheric conditions that cause global warming. Developing countries did not make such commitments.

But China, India and Brazil, which were classified as developing countries under the Kyoto pact, are growing rapidly, and their emissions levels are approaching or surpassing those of industrialized nations. In Copenhagen, industrialized countries sought verifiable emissions cuts from China, India and Brazil. China balked at calls for monitoring, causing friction between U.S. President Barack Obama and Chinese Premier Wen Jiabao.

One casualty of the failure to reach a stronger agreement at Copenhagen was a plan for compensating countries for reducing deforestation. Clearing of tropical forests for farming or cattle ranching in countries such as Brazil and Indonesia is a major contributor of carbon emissions.

Negotiators made progress on the framework of a plan called REDD – Reduced Emissions from Deforestation and Degradation – but the larger agreement, of which it was to be part, never materialized. The issue is likely to be on the agenda when climate negotiators meet again in 2010 in Mexico.

Church activists say real progress on climate change will only come with economic change. In a statement sent to various U.N. delegations before the Copenhagen climate conference, Maryknoll told delegates, “At the heart of the current global social and ecological crises is an economic system that tries to lock interconnected societies into unsustainable patterns of production, overconsumption and waste-generation, all driven by the mandate to grow.”

The statement added: “The economy exists to serve the earth and its inhabitants. For too long the reverse has been true, causing enormous economic and ecological debt.”

McNeely said church groups must focus on educating members of Congress about climate change issues before lawmakers consider a climate change bill, probably in early 2010. She called the U.S. Environmental Protection Agency’s decision to classify greenhouse gases as pollutants that must be regulated a “hopeful sign.”

McNeely said she also was encouraged by the number of young people who participated in protests and other activities in Copenhagen during the conference. Youth groups in the United States raised funds to help young people from poor countries attend, she said.

“My hope lies with the youth. Young people realize (global warming) is a problem, and if something isn’t done, their life is going to change,” she said.

Abbi called for people of faith in industrialized countries to forge a closer bond with countries already suffering the effects of climate change.

“We want them to be in solidarity with us,” she said. “For us, the impact of climate change is real.”