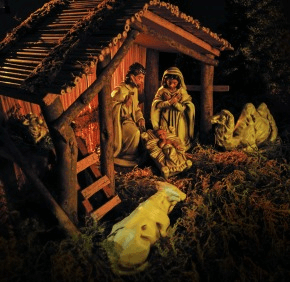 If the holiday season seems more like a stressful season, then we should really be looking at it as Advent season, say parish priests.

“I always suggest people focus on Advent, and not on Christmas, because our culture really seems to jump from Halloween right to Christmas,” said Father Gerard Francik, pastor of St. Mark in Fallston. “It really shortchanges us on the preparation time we need.”

During Advent, he said, Catholics should “slow down, take stock of where we are and appreciate what we have.”

That can be easier said than done, acknowledged Monsignor Joseph L. Luca, pastor of St. Louis in Clarksville, thanks to “all we have to do for the cultural celebration of Christmas” – buying presents, planning meals and parties, making accommodations for relatives, etc.

Nevertheless, Monsignor Luca continued, “if we don’t take time to make Advent what it’s supposed to be, then we miss that inner peace that God has meant for us.”

Father Francik suggests that the mild desolation of a Maryland winter can be conducive to finding that peace.

“Darkness comes earlier; on a clear night the stars are out,” he said. “It helps me become more meditative and focused on the coming of Christ.”

Christ’s coming, Monsignor Luca said, should always be the crucial focus, but especially this year.

“This in particular is a very important Advent for our church and for our nation, because of the difficult election cycle we’ve been through,” he said.

He referenced the Gospel of Matthew, in which Christ is referred to as “Emmanuel,” meaning “God is with us.”

“A child for us is a reminder that God has not abandoned us,” Monsignor Luca said.

“It kind of leads us back to the basic ‘why,’ which is Jesus,” Father Wojtek said. “Whenever you see a light, remember the ‘why’: Christ is the light of the world.”

It is also a reminder that we should not abandon those in need, which is why opportunities for acts of charity abound during Advent.

The annual Breakfast with St. Nicholas at St. John Regional Catholic School in Frederick, sponsored by the school’s Home and School Association and scheduled for Dec. 10, balances charity, fun and reverence.

The guest of honor is not Santa Claus, “the symbol,” said Mark Leslie of the Home and School Association, but St. Nicholas, “the actual man.” The fourth-century bishop was born in present-day Turkey, imprisoned under the Roman emperor Diocletian, released by Constantine and participated in the Council of Nicaea.

He was known for secretly giving gifts to those in need.

“He’s not a 450-pound guy with arteries that are about to explode and a fluffy white beard,” joked Leslie, a parishioner of St. John the Evangelist in Frederick.

There has always been a philanthropic bent to the breakfast, he said. This year, diners will come bearing gifts for Toys for Tots. Furthermore, each of the school’s nine Frederick-area “feeder parishes” will send one family in need to enjoy the breakfast free of charge as well as receive some modest Christmas gifts, Leslie said.