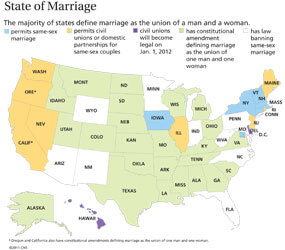 WASHINGTON – The widening campaign by gay rights advocates to promote same-sex marriage as a civil rights issue is forcing Catholic and other religious institutions to confront charges of intolerance and discrimination.

Recently, the Diocese of Peoria, Ill., withdrew from all state-funded social service contracts, citing increasing clashes between state law and church teaching on same-sex relationships. The Diocese of Rockford stopped offering state-funded adoptions and foster care services when the Illinois civil unions legislation took effect June 1. Catholic Charities in the dioceses of Joliet and Springfield and Catholic Social Services of Southern Illinois in Belleville also have been involved in legal proceedings with the state since then.

Elsewhere, including New York where a same-sex marriage law took effect July 24, church institutions are carefully monitoring how such laws are being applied and are vigilant for threats to religious liberty in the areas of taxes, housing, education and employment.

Those changes can affect a wide range of practices far beyond marriage such as whether:

– A private individual can deny renting an apartment to a same-sex couple on religious grounds.

– A public school teacher who refuses to talk about same-sex marriage as a justice issue can continue to teach.

– A counselor’s license can be revoked for declining to accept same-sex couples as clients.

– A religious organization that does not recognize same-sex marriage can be considered discriminatory by a state or local government and lose any contract for services.

“Redefining marriage has a multiplier effect,” Picarello explained to Catholic News Service. “The problems proliferate. The problems that we see under mere sexual orientation anti-discrimination laws multiply by order of magnitude when marriage is redefined.

“Marriage is a legal lever, because in our society we have a legal infrastructure that rewards those who support marriage, and punishes those who oppose it. When that legal structure … is then applied to a relationship that isn’t marriage, the people who object to that definition are going to suffer severe disadvantages,” he added.

Picarello pointed to the February announcement by the Justice Department that it would no longer defend the Defense of Marriage Act – DOMA – because it is biased and prejudicial against homosexuals and therefore is discriminatory as among the mounting challenges facing religious institutions opposed to same-sex marriage.

“They basically suggested that any law that distinguishes between same-sex couples and different sex couples, whether it’s for purposes of marriage or anything else, violates the Constitution if the government is doing it, (that) the government can’t make those distinctions,” Picarello said.

“But all DOMA does is define marriage as it’s always been defined,” he said. “The church stands behind that definition and now the church has been lumped in with bigots and haters.”

For states to imply such a comparison is a major leap because it dismisses religious tradition and the morality of same-sex relationships while portraying religious objections to same-sex marriage as equivalent to racial discrimination.

The religious liberty issue has largely been played out at the state level. Same-sex marriage has been legalized through legislation or by court decisions in Connecticut, Iowa, Massachusetts, New Hampshire, New York, Vermont and the District of Columbia. Illinois and Rhode Island this year enacted civil union laws; come Jan. 1 civil unions will become legal in Delaware and Hawaii.

In California, Proposition 8, a ballot initiative approved by voters in 2008 to ban same-sex marriage remains in the courts and may end up at the U.S. Supreme Court.

Same-sex marriage is banned by law or constitutional amendment in the remaining 40 states.

In addition to the normal exemption for clergy from participating in a same-sex marriage ceremony, Connecticut’s law has one provision protecting fraternal societies from providing insurance benefits to anyone if doing so violates the free exercise of religion and another safeguarding the rights of a religious organization in the delivery of adoption, foster care or social services as long as government funds are not involved.

“In the long hours we ended up with a very strong religious exemption,” Culhane said. “We were very, very happy.”

In Iowa, where the state Supreme Court ruled that same-sex marriage is legal, Tom Chapman, executive director of the Iowa Catholic Conference, said the church has been minimally affected by the court’s decision.

The likelihood that the issue will be addressed by the legislature is slim, Chapman told CNS.

“My own feeling is there is a desire on everybody’s part who wants same-sex marriage to leave it alone because they don’t want us to have a defense of marriage amendment or legislation (that could restrict same-sex marriage),” he said.

Such an exemption in Illinois’ civil unions law failed to resolve the dilemma faced by the Peoria Diocese. The predicament arose when state Department of Children and Family Services mandated that the diocesan Catholic Charities system end the practice of referring adoptions and foster placements to same-sex couples to another agency. Catholic Charities appealed, but lost in court, leading the diocese to back out of all state contracts for social services.

Robert Gilligan, executive director of the Catholic Conference of Illinois, told CNS that state law affords protections for religious practice, but that the state has the right to contract with any agency it for the delivery of services.

“The danger is that faith-based organizations will get crowded out of the provision of services that are desperately needed,” he said.

Even with specific exemptions for religious institutions, individuals everywhere face possible infringements on the practice of their faith, said Daniel Avila, policy adviser for marriage and family to the U.S. bishops’ Subcommittee for the Promotion and Defense of Marriage.

“Even if you think you’re protected and this is not an issue in your own state, given you have a state DOMA, they should be quite aware of events happening at the national level that could then bring these very issues and problems into their own lives,” he said.

Avila suggested that at least two cases, including California’s legal battle over Proposition 8, will likely make their way to the U.S. Supreme Court and determine the legal status of same-sex marriage in the country.

The cases are likely two years away, he said.

That leaves states to follow their own course on what actions are discriminatory and what are not and religious organizations guessing which way they will go.