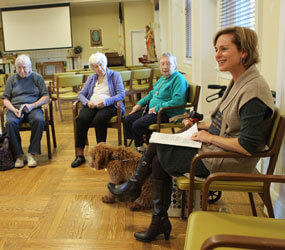 Movie scenes often paint the picture of a person in their 80s sitting at a table. They’re tired. Their children sit across from them, holding a brochure that features couples in their 70s happily walking in front of a retirement community.

No one looks forward to that discussion, especially parents in their 70s and 80s. How do children tell their parents that it’s time to sell their longtime home?

The home that was a place of incredible memories is now too much to handle physically, but letting go hurts too much.

Luckily, Colleen LoPresto’s parents, Gloria and Bob Larkin, were ahead of the curve. They moved to Oak Crest retirement community in Parkville eight years ago while in their early 70s, before LoPresto even thought about having “the talk.”

“Their decision was a true gift to the children,” she said.

Oak Crest is personal in more ways than one for LoPresto, because she also serves as the executive director of the facility. She joined the staff five years ago after being impressed with the care that was shown to her parents and their friends. Her father-in-law also lives there.

The Larkins made the decision, LoPresto said, because they were being selfless.

“What they said to me was, ‘we didn’t want to be a burden by you making the decision for us,’” LoPresto remembered.

It’s not always so easy. LoPresto remembers one Oak Crest resident coming up to her and saying that she had fought moving out of her home for years, because she said “I always wanted to die in my home.”

When she moved, LoPresto said, the woman realized she was dying in her home, rather than living. Now the woman participates in Oak Crest’s numerous activities.

“She’s excited,” LoPresto said. “She feels so much freer.”

LoPresto recommends that adult children of aging parents play an active role in the search for a retirement living community. Oak Crest assists with moves, helps find a realtor and has a seminar about what is trash and what is a treasure.

“I think it’s critical that they are involved,” LoPresto said of the children.

Children who are in their 60s often have trouble assisting their aging parents with tasks, while keeping up with their own schedules. At Oak Crest, those children can still play active roles without worrying about their parents’ safety and security.

“I don’t worry if their house is getting broken into or if my mother needs to go to the hair salon,” LoPresto said. “Everything is here for them.”

LoPresto knows some aging people think their children are as attached to the home as much as they are. She believes the opposite. Children want what is best for their parents, she said.

“If I could figure out a way to tell people to not wait too late, while they’re still active, to give up that house that is a burden to them, that would make me feel good,” LoPresto said.

She is thankful of her parents’ foresight.

“I sleep well at night,’ she said.