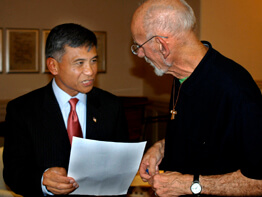 And former U.S. Defense Secretary Donald Rumsfeld was less than honest in his knowledge of the notorious scandal, Mr. Taguba added in a talk Oct. 4 at the University of San Francisco’s Center for the Pacific Rim.

He accused Mr. Rumsfeld of being untruthful with him and also misleading Congress when the former defense secretary claimed he had not read the Army official’s report.

“I would find it rather disturbing if no one had forwarded the report to the secretary of defense,” said Mr. Taguba. “I do not believe he had not seen the report.”

In 2004, amid allegations of abuse in its military prisons in Iraq, the Army ordered Taguba to conduct an investigation at Abu Ghraib prison west of Baghdad.

Although his commanding officers ordered him to limit his scope to the military police at Abu Ghraib, Mr. Taguba was nevertheless critical of military intelligence, the CIA and private contractors for their roles in abuse at the prison.

Accompanying the report were more than 100 photographs recovered during the investigation, some of which were later leaked to CBS and aired on “60 Minutes.”

Mr. Taguba said photos of abuse shown in the media were mild in comparison to others that have not been made public.

“Not everyone saw what I saw,” Mr. Taguba said.

The unreleased images, he said, include one showing an American soldier sodomizing a female Iraqi detainee. The soldier could be seen videotaping the act while engaged in it; another soldier also videotaped it in the background, he said.

Mr. Taguba cautioned that releasing all of the photos would, in his opinion, “irrevocably harm” the reputation of the United States and lead to further bloodshed.

He said that to his knowledge only his commanding officers, members of the Bush administration and select members of Congress have seen all the photos. Mr. Taguba said he even initially kept the photos from his own investigators, not wanting to prejudice their work.

Mr. Taguba went through official channels with the report, giving it only to his superiors. However, he said whoever leaked the report and photos was acting within the First Amendment.

“If it weren’t for CBS, nobody would know about this,” he said.

After his report was finalized and delivered to his superiors, Mr. Taguba himself became a target, he said. Army Gen. John Abizaid, then commander of U.S. forces in Iraq, told him, “You and your report will be investigated.”

“All of a sudden, I became the problem,” Mr. Taguba said. “I was the man everybody ostracized. I am now part of the Mafia. I’m now a suspect.”

Ordered back to the Pentagon in May 2004, Mr. Taguba briefed senior White House and military officials, including Rumsfeld; Air Force Gen. Richard Meyers, then chairman of the Joint Chiefs of Staff; and then-Deputy Defense Secretary Paul Wolfowitz. Mr. Taguba told his audience the meeting was unproductive and brief.

It was during this meeting, Mr. Taguba said, that Mr. Rumsfeld first told him that he had not read the report or seen the photos. In June, Mr. Taguba told writer Seymour Hersh of The New Yorker magazine that when Mr. Rumsfeld repeated this claim in congressional testimony the major general found it hard to believe the secretary.

Mr. Taguba told Mr. Hersh that one possible explanation for Mr. Rumsfeld not seeing the report and photos could have been that his aides and military officials did not want to deliver bad news to the secretary, whom many privately acknowledge had a bad temper. In the end, Mr. Taguba dismissed this possibility.

“Rumsfeld is very perceptive and has a mind like a steel trap,” Mr. Taguba told Mr. Hersh. “He’s trying to acquit himself, and a lot of people are lying to protect themselves.”

Mr. Taguba said his abrupt retirement came in the wake of his report, and his dismissal was likely the result of his outspoken criticism of the policies that led to the abuse at Abu Ghraib.

In January 2006, Mr. Taguba was instructed by Gen. Richard A. Cody, the Army’s vice chief of staff, to retire by January 2007. Reportedly no explanation was given. The retirement ended a 34-year military career.

Mr. Taguba’s appearance at the University of San Francisco was his first free public event since his retirement.

He took a handful of questions after his presentation, and stayed an additional 15 minutes to visit with audience members, including Franciscan Father Louis Vitale, who along with Jesuit Father Steve Kelly, is facing trial for federal trespass at Fort Huachuca in Arizona in connection with a protest against torture.