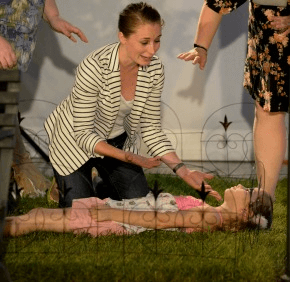 Third in a series, “How I Spent My Summer Vacation”

ABINGDON – Just over a dozen years ago, the youths of St. Frances de Sales Parish wanted to stay together as a faith group after their confirmation. That idea evolved into the Journey In Faith youth and young adult group, under the leadership of Patrick Perkins.

A few years later, the Abingdon parishioner’s three children expressed an interest in staying involved in drama during their summer break from high school.

The two notions converged as “The Shadow Players,” part of the parish’s Journey In Faith group. Now in their ninth season, the troupe performs traditional plays as well as original faith-based stories for the Harford County community.

Penned by Perkins, “What Happened at Fulton Square” asked the audience if they believe in miracles, and challenged them to reflect on how they treat their neighbor during a five-night engagement July 27-31.

The 36-member cast and crew, ranging in age from 8 to 56, spent most of July rehearsing, building the set and converting the church hall into a theater.

Set in a fictional New York City park, the parish’s Kilduff Hall was decorated with benches, trees, grass, a street lamp, the sound of crickets and a working 6-foot fountain. Professional-grade stage lighting was used to set the mood for various scenes.

“There’s a greater purpose than performing a play,” Perkins said. “We’re giving the people a message.”

Molly Gallagher played Maura, Kristen’s mother, who blames God for the  leaving her a young widow. She berates Olmstead for moving her child.  Mother and daughter, however, find the girl’s hydrocephalous is  completely gone. Diane Traube, playing Dr. Rebecca Epstein, explained,  “It was as if she never had the condition.”

Members of the audience were left to consider whether this was a miracle  or a medical phenomenon.

In another vignette in the play, Rebecca Lewis played “Sully” Sullivan, and  befriends Marian Myers (played by Erin Perkins), whose character was based on an actual homeless person from Dundalk.

“Sully” offers Marian a muffin, which has a positive impact on both giver and receiver. Their long-term bond provides a reminder that the homeless are no different than the audience.

“The idea that everybody’s life has value is so important,” said Father John B. “Jack” Ward, pastor of St. Francis de Sales, who said the play was “a gift to the parish.”

The play included Alex Andrews and Ray Traube as a journalist and TV evangelist, respectively, who question the miracle on camera and mock the other characters off it.

Annie Ross, another cast member, said, “It’s interesting to think why (homeless) people are the way they are. Talk to them or pray for them if you can’t do much.”

The players received a standing ovation at their final performance, which was streamed on Facebook Live. The Shadow Players have been invited to perform at Cabrini College in Pennsylvania, as well as other Harford County churches.