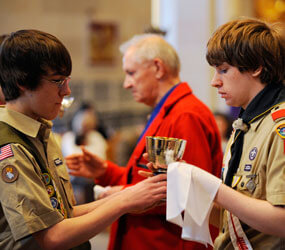 WASHINGTON – The year 1910 was quite the watershed year for U.S. Catholicism. Catholic Charities USA was founded a hundred years ago. So were the Maryknoll Fathers and Brothers, followed by the Maryknoll Sisters in 1912. The Crosiers, founded in Europe 700 years ago, decided to place their first outpost in the United States in 1910.

And that’s just a sampling of Catholic groups marking their centennial.

What was it that prompted these Catholic organizations to take root in 1910 and not only to withstand the vagaries of the following century but to flourish a century later with an enduring influence on the larger society?

To hear some historians describe it, the growth of Catholic organizations 100 years ago has much to do with the Progressive Era, a period of social activism and reform that had its heyday from the 1890s to the 1920s. Among its leading exponents were presidents, including Teddy Roosevelt, Woodrow Wilson and Herbert Hoover, Wisconsin Gov. Robert La Follette Sr., and Secretary of State Charles Evans Hughes, who went on to become Chief Justice of the United States.

It was also a time when the Vatican no longer considered the United States as missionary territory. This happened in 1907, according to Sinsinawa Dominican Sister Janet Welsh, director of the Mary Nona McGreal Center for Dominican Historical Studies at Dominican University in River Forest, Ill., outside Chicago.

“That has something to do with Maryknoll’s beginnings,” she said. “Maryknoll was founded to be in mission to other people.”

It also was a time when “the Catholics are reaching critical mass in terms of numbers,” said Maria Mazzenga, an education archivist for the American Catholic History Research Center and University Archives at The Catholic University of America, Washington. Immigrants flocked to the United States from the largely Catholic countries of Ireland, Poland, Italy and Germany. Immigration restrictions did not take hold in U.S. law until 1924. “There are millions of them at this point and they’re becoming more and more American,” she added.

At the same time, though, “they’re discriminated again by the Protestant organizations,” Mazzenga said. “A lot of Protestant reformers are trying to proselytize Catholics and recruit them. This leads to this ‘We’re going to establish our own institutions. The Protestants can’t do it as well as we can for our own people.’“ As a result, she added, “they begin to imitate Protestant reforms and bureaucratization.”

One example is the Boy Scouts of America, also founded in 1910. Almost immediately after it was organized, a Catholic component to the Scouts was formed in England and quickly made its way across the Atlantic.

Sally Dwyer-McNulty, chair of the history department at Marist College in Poughkeepsie, N.Y., said in an e-mail to Catholic News Service, “Scouting enjoyed the support of certain members of the hierarchy and this gave it a unique imprimatur – an unexpected one since Catholics and Protestants did not usually cooperate. Scouting had and has a religious component and it encouraged homosocial activity with military-style order. These characteristics made it akin to the priesthood and the hierarchy was eager to encourage masculine esprit de corps among the male youth.”

John Farina, an associate professor of religious studies at George Mason University in Fairfax, Va., does not buy into the notion that the era was remarkable.

Having an organizationally based Catholic Church at that time, though, “makes perfect sense,” Farina said. “It’s sort of like ‘OK, if we’re not going to convert the society through preaching the Gospel, we can do charitable stuff,’ and the women of these women’s religious orders, they’re teaching, they’re running hospitals.” Any outreach to non-Catholics by Catholics in that time, he added, “you do that through social work, you do that through health care.”

Having an organizational structure behind it by the end of World War I might have been helpful to the church and its members, because at that time, as Farina noted, “you have this rebirth of American Protective Association and the Ku Klux Klan. … The APA was blatantly nativist and anti-Catholic, and the ‘new Klan’ of the 1920s, in addition to being anti-black, was anti-Catholic and explicit about that.”

“If anti-Catholic sentiment had been stronger or the progressive moment not been as strong, not as national, it could have gone the other way if all those pieces had not been in place,” said Joseph Curran, an assistant professor of history at Misericordia University in Dallas, Pa.

Catholics also were forming and leading labor unions during this time, too, secure in the knowledge that it was permissible based on Pope Leo XIII’s 1891 encyclical “Rerum Novarum” (on capital and labor), Curran added.

Sister Janet from Dominican University recalled one high-profile example of the century-ago separation of Catholics and non-Catholics: “Knute Rockne tried to get Notre Dame into the Big Ten (Conference), but he couldn’t do it because there was an anti-Catholic bias.”