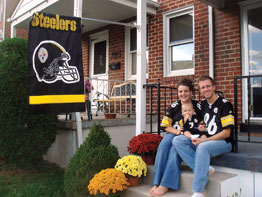 Several weeks ago, Emma Horning’s Annapolis public elementary school was caught up in purple passion. The Fridays before Ravens games had children looking to don the colors of Baltimore’s National Football League franchise.

Andrea Horning had other ideas. The 35-year-old Pittsburgh-native and St. Mary, Annapolis, parishioner wanted her daughter to wear black and gold, colors for the Ravens’ AFC North Division rival, the Steelers.

“Mommy, they’ll make fun of me,” the daughter said.

When Emma got out of school that day, she confirmed her classmates had given her grief. When Mrs. Horning asked if Emma had followed through with her motherly advice, the daughter nodded. Mrs. Horning had to know what happened next.

“They had no answer,” Emma said.

When you’re a Pittsburgh Steelers fan in the Archdiocese of Baltimore these days, life is good. The Steelers earned a berth in Super Bowl XLIII after beating the Ravens 23-14 Jan. 18 in the AFC Championship.

A Feb. 1 victory over the Arizona Cardinals would bring Steelers fans their sixth Super Bowl, one more than any other NFL franchise.

The Steelers have long had a rabid following in Western Maryland and a sizable contingent closer to the Ravens’ Baltimore City home, M&T Bank Stadium. That is partly due to a lack of an NFL team in Charm City between 1984 and 1996. Some fans adopted the Steelers as their team, while other Pittsburgh residents moved to Maryland for work.

“Working in Baltimore, I get ragged on all the time,” said Mrs. Horning, a computer systems analyst. “They couldn’t say anything last week (after the Steelers beat the Ravens).”

Although the couple’s one-year-old son is named Benjamin, it’s not because of the Pittsburgh quarterback. The family has quickly turned their Halethorpe home into a house of steel.

There are also subtle ways to show fandom. When Bill Kirsch serves as extraordinary minister of Holy Communion at St. Ignatius, Hickory, he often will wear a Steelers tie.

The Pittsburgh native has two sons who are Ravens fanatics. His wife, Susan, jokingly refers to herself as “Switzerland,” because of her neutral approach to family members.

Mr. Kirsch remains hopeful of another Super Bowl victory, but is not making any Joe Namath-like guarantees.

“I personally don’t like to eat crow,” Mr. Kirsch said. “We do our talking on the field and fortunately we’ve talked a lot and backed it up.”