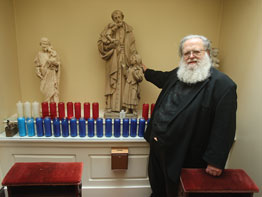 For The Catholic Review

In his office at St. Vincent de Paul in Baltimore City, Father Richard T. Lawrence speaks about the relationship between Psalms 22 and 23.

“Psalm 23 is wonderful,” he says, “but equally important is Psalm 22.” That psalm reports the dying words of Jesus.

“You get an idea why they are such wonderful prayers,” Father Lawrence says. “They come from the gut.”

A repair man appears in the doorway with a pressing issue: air conditioning. Father Lawrence switches gears and resolves the problem, then continues recounting his journey into the priesthood.

This sequence of events characterizes his ministry. In one minute, he brings Scripture to life in new and exciting ways, and in the next, gets things done for his community.

Whether Father Lawrence is fixing the cooling system or lobbying for more middle-and low-income housing in Baltimore City, he is results-driven and tells it “from the gut.”

Father Lawrence celebrated 40 years as a priest June 29. The past 35 have been spent at St. Vincent de Paul, which has flourished under his leadership.

“Father Lawrence makes us want to learn more,” she said, referring to his passion for scripture. “Through his scholarship, his exegesis and his love of scripture, he has deeply enhanced our faith.”

With a history of leadership in liturgical reform, opposition to war, and a special dispensation from Rome to hold mass for pressmen who print Sunday papers, St. Vincent provides a great fit for Father Lawrence.

“He takes a stand and can do it colorfully,” said Father Richard J. Bozelli, pastor of Corpus Christi, Baltimore. “I look to him as a leader.”

Father Lawrence first developed a social conscience as a young boy, along with his brother Gene, at the dinner table. When either son repeated something that gave her concern, his mother, Irene, would ask, “If that were true, what kind of a person would God be?”

Father Lawrence described his family as devout Catholics who went to Communion every week at a time when others did not.

“They also believed in thought,” Father Lawrence said of his parents. “They influenced us by their teaching and by their example.”

He attended grade school at St. Charles Borromeo, Pikesville, where he served as an altar boy.

“I had the good fortune to have two priests early in my life who were really making a difference,” he said.

“They were profound thinkers and hard-driving doers, legends of the archdiocese,” Father Lawrence said.

He enrolled at Loyola Blakefield in the late 1950s and developed his talent for oratory on the debating team. After two years at Loyola College, he thought seriously about the priesthood.

He re-established ties with Father Connolly and Monsignor Gamber at the old St. Mary’s Seminary on Paca Street, where he was also influenced by Father Eugene A. Walsh, S.S., and Father Henry Alpert.

“They were a generation of giants,” he said. “They were setting a credible example of a good way to invest a life. I told myself, ‘if I can do that with my life, that would be cool.’”

“I had to learn to work both sides,” Father Lawrence said, “to keep people from getting hurt.”

He is still doing that today.

At St. Vincent de Paul, Father Lawrence has headed the Jonestown Planning Council and its day care center, been a strong proponent for parish schools, and defended the homeless. He has also been a force in Beyond the Boundaries, which seeks affordable housing.

“He’s able to articulate a vision and bring people together,” Father Bozelli says. “He can disagree, but he will incorporate ideas from the other side along the way.”

Under the direction of Father Lawrence, St. Vincent de Paul has become a

leader in lay ministry development. Lay volunteers regularly counsel the homeless in the park next to the church, which St. Vincent de Paul purchased from Baltimore City.

When city officials threatened to arrest the homeless for sleeping in the park, Father Lawrence vowed that he would be next in line to be placed in cuffs.

Father Lawrence believes in empowering his congregation. He developed his leadership style from the late Cardinal Lawrence Shehan, who taught him to “identify the need, identify the talent, and put them both together.”

Now Father Lawrence is passing down what he has learned to the next generation with his message of action.

“He’s an inspiration,” said Father Bozelli. “He has a great sense of where we can go.”