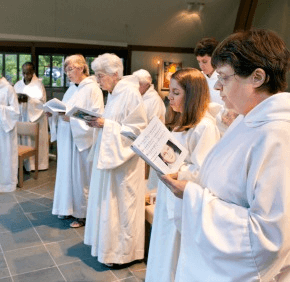 By Maria Wiering
mcwiering@CatholicReview.org
TOWSON – If there’s one thing to know about Baltimore’s Carmelites, it’s this: “We’re all passionately in love with God.”
So says Sister Cecilia Ashton, a 37-year-old novice and former dentist who sold two Columbia-area practices to join the community in 2013. Her eyes shone as she described feeling a sense of “home” in the solitude of Baltimore’s Carmel, set in 27 wooded acres off Dulaney Valley Road.
Like the Archdiocese of Baltimore, the community is celebrating its 225th anniversary this year. It is also commemorating the 500th birthday of St. Teresa of Avila, a Spanish mystic who reformed her order, founding the Discalced Carmelites with St. John of the Cross. She was born March 29, 1515.
St. Teresa strove to bridge the natural divide between the Carmelites’ hermetic tradition and communal life, said Sister Constance FitzGerald, 80, who joined the community in 1951.
The 17 nuns in Baltimore’s Carmel, ages 36-94, navigate the two poles daily. They unite for Mass, two meals and to chant some of the Liturgy of the Hours. The rest of their time is typically spent in quiet work, study and prayer.
They spend at least two hours each day in personal prayer, developing what Sister Constance described as “a life of intimacy with God.”
Carmelites are contemplative nuns, their lives dedicated to prayer. Unlike “active” or “apostolic” sisters, who may work in professions and are visible in the community, the Carmelites typically remain in their monastery.
Instead, the community comes to them, some for daily and Sunday Mass, others through prayer requests.
A simple life
Nov. 2-8 is National Vocations Awareness Week, which promotes vocations to the priesthood, diaconate and consecrated life, including the Carmelites.
Adjusting to Carmel’s simplicity was significant for Sister Mary Fleg, 50, who was first a Baltimore social worker and then an attorney before joining the Carmelites in 2003. She gave up a comfortable life – a condo, car, friends – for a monastery, because of the interior peace she found within its enclosure.
Gone, however, were the measurable marks of accomplishment.
“I think I had a harder transition than many. Everything about the life I was living before is different here,” she said. “I was rewarded for hard work and initiative. … It took me a long time to settle in and figure out ‘Who am I here?’ All those things I thought were me were no longer here.”
Before entering the community, Sister Mary struggled with feeling helpless to change the world.
No longer.
“I believe so strongly that prayer can change the world,” she said. “Teresa (of Avila) really believed that prayer is an apostolic work. … She believed that praying for the world is as necessary as being out in hospitals or teaching. Sometimes people miss that.”
Long history
Baltimore’s Carmel was founded in 1790 in Port Tobacco by daughters of prominent Southern Maryland Catholic families who had joined Carmelite communities in Europe’s Low Countries. Four nuns – three American, one British – returned to America to found the young country’s first religious women’s community.
At Baltimore Archbishop James Whitfield’s request, the nuns moved from Charles County to Baltimore in 1831. For two decades, they ran a girls school at their monastery on Aisquith Street to support themselves. They moved to Towson in 1961 and transformed a 1920s stone house into a monastery.
The community maintains an impressive archive of documents from the archdiocese’s earliest years, including more than 27 letters from Archbishop John Carroll, America’s first Catholic bishop. Two-thirds of the 65 women’s Carmelite communities in the U.S. can trace their origins to the Baltimore community, said Sister Constance, the archivist.
Holy mountain
The anniversary of the community’s founding and St. Teresa’s milestone birthday coincide with the Year of Consecrated Life, Nov. 30, 2014 – Feb. 2, 2016. The year celebrates and encourages vocations to all forms of consecrated life.
The nuns strive to interpret their 12th-century founding by hermits in the hills of present-day Israel to the 21st-century church by pointing to St. Teresa. They hope her birthday sparks interest in the writings and spirituality of the visionary saint, the first woman named a Doctor of the Church.
Sister Cecilia, a 1995 graduate of The Seton Keough High School in Baltimore, has teamed with other novices to launch ToTheHolyMountain.org, a website dedicated to Teresian spirituality with podcasts on Carmelite spirituality.
The sisters celebrated St. Teresa’s Oct. 15 feast day with a community dinner, public concert and Mass.
“As we stand at the beginning of this centenary year, we hope to open Teresa’s riches and treasures to as many people as we can,” said Sister Constance. “This is a time when contemplative prayer is very important.”
Also see:
Calvert Hall grad’s gift includes honor for longtime math teacher
Spiritual milestone: Parishioners make one million rosaries for members of the military
PrevNext