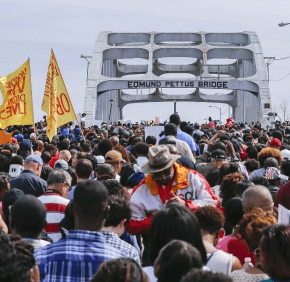 By Ralph E. Moore Jr.
Special to the Review
Standing on the crest of the Edmund Pettus Bridge in Selma, Ala., March 8, I whispered a prayer for everybody in the United States. Perhaps as many as 100,000 people made the pilgrimage to the span that afternoon to remember one of the bloodiest assaults on citizens peacefully demonstrating for their freedom. Maybe, as the African proverb commands, those citizens in 1965 had prayed while moving their feet across the bridge.
Fifty years later, the mood was completely different from the hatred and violence of the state troopers on horseback who had clubbed, tear-gassed and whipped innocent, frightened but courageous fellow Americans peacefully demonstrating for their rights. A newfound friend on my trip referred to the spirit of the throng on the bridge by a Walt Whitman term, “the Divine Common.”
On that 50th anniversary of Bloody Sunday, I wondered where such hatred comes from, that one would draw blood from one’s own brothers and sisters? What is the thinking that says to another human being: you are not good enough to vote, go to school with my children, live near me, sit next to me on the bus or marry someone of my skin color?
How did one set of God’s children turn on another set?
In their 1979 Pastoral Letter on Racism, the U.S. Catholic bishops declared, “Racism is a sin: a sin that divides the human family.” Fear of others who are different is what drives the sin of racism. Bear in mind, America’s original sin was its treatment of Native Americans and then persisted with blacks and other persons of color. But slavery was a sin, as was segregation, and as are poverty and mass incarceration America’s sins today.
Policies that have allowed too many citizens to be hungry, for countless youth to be homeless, for our elderly to be cold in winter and many without medical care are stains on our American soul, because of what our society has done and what it has failed to do. Perhaps, despite evidence to the contrary, the fear is that there is not enough for all: not enough food, jobs or decent housing. The fear is irrational and it is causing suffering.
Standing in the middle of the Edmund Pettus Bridge, I thought about the 600 or so demonstrators standing there in 1965 facing state troopers on horseback and their prayers that blood-splattered afternoon. I’m sure someone prayed for America’s soul, for racial and economic justice for all. The hope then was that demonstrators would be able to go forward from Selma to Montgomery. The walk was symbolic of America’s potential direction. Will we stay in place, stuck in the oppression of some of our fellow citizens or will we go forward and become the “Beloved Community” that Rev. Dr. Martin Luther King dreamed of?
Fifty years after the shameful beatings there, so many surrounding and standing on the bridge prayed that we keep going forward in fairness, forgiveness and love.
Ralph Moore is a parishioner of St. Ann in Baltimore and program manager for Restoration Gardens, an apartment building and resource center for homeless youths.
To read more Amen columns, click here.
PrevNext