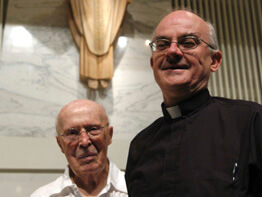 PITTSBURGH – At age 95, Joseph Martinelli is a regular at daily Mass at St. Colman Parish in Turtle Creek.

In the parish bulletin he’s listed as pastoral assistant, just hinting at the many roles he fills.

“He’s been active for many decades,” said Father James Kunkel, pastor. “He serves liturgically as a eucharistic minister and reader, he takes Communion to the sick, does the prayers at funeral homes and goes to the cemetery.”

Martinelli also oversees the parish’s money counters on Sunday mornings and helps with the parish festival.

“He’s very holy, spiritual and dedicated to the church. He’s willing to help,” Father Kunkel said. “We call him ‘the monsignor.’ He looks like an Italian monsignor.”

Priests who know him say he reflects how laypeople are called to assume new roles today in a church experiencing declining vocations to the priesthood.

But Martinelli’s extensive church involvement is nothing new. It started the day he retired from Westinghouse where he worked for 42 years as an electrical instrument calibrator. That day, his pastor told him he had something for him to do, and the work hasn’t stopped since.

Small in stature and agile, Martinelli is still able to genuflect and care for his own garden.

He was playing golf twice a week until a year ago when the people he played with got sick, as he put it.
And, after 12 years, he recently stopped delivering for Meals on Wheels, concerned about driving the winding, challenging roads of the area.

In addition to his parish activities, he also served as secretary of the board of commissioners of Wilkins Township.

Martinelli came to the United States when he was 9 with his parents from the Abruzzi region of Italy. He earned his electrical engineering and political science degrees from the University of Pittsburgh by going to night school.

“I was blessed with good parents,” he told the Pittsburgh Catholic, diocesan newspaper.

It was after he married his wife, Sophia, that he became really involved in church life at St. Colman.

And as the father of four girls, he said he wanted to set a good example for them.

Three of his daughters live nearby and the fourth one lives in Florida. Eight grandchildren and five great-grandchildren fill out the family.

Though Sophia died 23 years ago, he talks of her often.

“She’s guided me a lot,” he said. “She came from a very good Catholic family.”

It was that influence, he said, that made a genuine impression on him.

As for his lifetime of work with the church, he said, “It’s pretty hard to describe. It seems to be the proper thing to do. I’ve enjoyed 95 years of my life, and I want to give something back.”