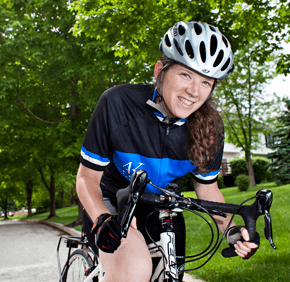 ELLICOTT CITY – Sixty miles is the farthest Stephanie Ausfresser has cycled in one day, but she’ll average 80 miles daily during a 70-day, 4,500-mile trek from Baltimore to San Francisco, which begins May 27.

A parishioner of Church of the Resurrection in Ellicott City, Ausfresser will join other college-age participants in the 4K for Cancer, a program of the Ulman Cancer Fund for Young Adults.

Consistent training has been difficult as she finishes her senior year at Towson University, and she knows she is not in top shape. However, the physical strain will be nothing compared to the battle cancer patients fight, the 22-year-old said.

“They have to go through struggles every day with chemo and radiation therapy, and we’re physically going up the mountains,” she said. “Obviously, it’s nothing compared to what they have, because they don’t have a break at the end of the day.”

This year, about 90 riders will bike in three separate groups from Baltimore’s Inner Harbor to San Francisco, Seattle or Portland, Wash., sleeping in community centers, school gyms and campsites along the way, Ausfresser said.

Participants raise funds to support the Ulman Cancer Fund, and meet with cancer patients along the ride. Ausfresser far exceeded her goal of $5,000 with more than $9,000 in contributions.

Each day, 4K for Cancer cyclists dedicate their rides to a cancer patient or victim. Ausfresser’s first day will be for her great aunt, Tina Rattini of Baltimore, who died at age 83 from breast cancer in November. Ausfresser’s training was already under way, but she said the ride took on new meaning with her great aunt’s death.

Along the route, cyclists will visit cancer patients and their caregivers, said Ausfresser, who noted that the biking provides some solidarity with the patients.

A Johns Hopkins University student founded the ride – then called the Hopkins 4K for Cancer – in 2001, to honor his father who had died of cancer, according to the organization’s website. It became an annual event, and last year it merged with the Ulman Cancer Fund for Young Adults, a Columbia-based nonprofit organization that supports young adult cancer patients and their families.

Ausfresser started cycling with her father, Stew, several years ago for fun and exercise. Before Stephanie began training, the pair typically rode 20 or 30 miles along rural roads near Ellicott City. Now Stew, 55, accompanies Stephanie for training rides three or four times a week.

“If it wasn’t for him, I definitely wouldn’t be going on this ride,” Stephanie said of her dad.

After Stephanie began college, Stew noticed her deepened desire to help others – a desire she attributes to her upbringing.

Still, Stew was surprised she signed up for the trip, and while he is proud that she is participating in the 4K for Cancer, he is ambivalent about the trek.

“It’s not her personality at all,” he said. “She’s big on helping other people, but she’s not one to go out there and be on her own.”

Stephanie Ausfresser will leave Baltimore two days after graduating with a degree in graphic design, and will job hunt when she returns in August. She is focused on finishing her courses and boosting her training, but looks forward to turning her attention to others during the ride.

“When I’m in school, I’m always focused on myself, trying to get work done,” she said, “but this trip will definitely be about everybody else, other cancer patients going through more stuff than I am.”