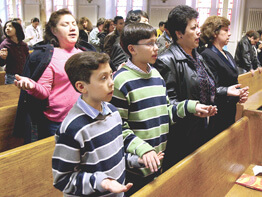 Maria Santini of Parkville received an early Christmas present during her weekly visit to St. Michael the Archangel, Overlea Dec. 3 – a Mass celebrated in her native Spanish language.

The Venezuelan-born parishioner of the church joined her two daughters and bilingual husband, along with more than 100 fellow Spanish-speaking Catholics, for the parish’s first Mass articulated in this language.

It’s part of a two-month pilot program conducted by the parish and the Archdiocese of Baltimore’s Hispanic Ministries to see if there is a need for such a Mass in the Northeast Baltimore region, which church officials believe is experiencing a Spanish-speaking population growth spurt.

The 100-plus congregation that gathered for the noon Mass in the church basement is twice the number Father James D. Proffitt, pastor, was anticipating.

“This was a terrific turnout,” Father Proffitt said after the Mass. “If we continue to have this kind of attendance, we’ll definitely make this a permanent Mass.”

That would be a welcome addition for Ms. Santini, who said celebrating Mass in Spanish not only feels more natural for her, it allows her to share her Hispanic roots with her daughters and her husband, Raffaele Santini, who speaks English, Spanish and Italian.

“This is a big moment for us,” Ms. Santini said. “I’m keeping my fingers crossed they will continue having it.”

To get the parish started in this endeavor, St. Michael the Archangel enlisted the aid of Father Christian Sotomayor, a Chilean priest whose sole purpose for being here is to launch the pilot program.

Father Sotomayor arrived in Baltimore Dec. 3rd and was fully prepared the next day to preside over his first Mass.

“I’m very pleased,” he said of the larger-than-expected crowd. “It’s a good beginning.”
The parish and Hispanic Ministries had received word from school officials in Northeast Baltimore County there is a growing number of parents who require a Spanish interpreter when discussing the education of their children, prompting them to begin the two-month experiment.

The closest Spanish Masses to Overlea had been in Essex, Abingdon, Towson, and Highlandtown, Father Proffitt said.

“We can’t expect people to learn English over night,” said Father Proffitt, who is not yet fluent in Spanish. “Even for people who have been in this country for a while and have begun to learn English, worship is something we’re always going to be more comfortable with in our native tongue.”