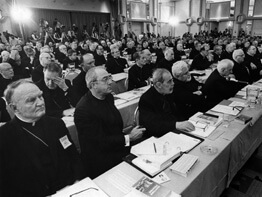 WASHINGTON – As U.S. residents struggle to make sense of the dramatic downturn in the economy, scholars and clergy are revisiting a 22-year-old pastoral letter written by the U.S. Catholic bishops promoting an economic policy that reins in unbridled consumerism and a lust for material riches and advocates the theology of sharing the wealth.

When the U.S. bishops released their 1986 pastoral letter, “Economic Justice for All,” the authors were addressing out-of-control spending by governments, national debt for Third World countries and rampant investing with little regard for social values, said Monsignor Stuart W. Swetland, 49, vice president for Catholic identity and mission at Mount St. Mary’s University in Emmittsburg, Md.

“The basic principles of that letter are very valid, and if they had been listened to more, we wouldn’t be in the economic crisis we are in today,” Monsignor Swetland told Catholic News Service. “Is it fair to be consuming so much when there is so much poverty around the world?

“Everyone should look at the resources entrusted to their care and see how we can all be the best stewards of our resources and how it can be best used and serve the community as a whole,” the priest said.

The pastoral letter suggests three questions that should be asked when forming an economic policy:

– What does it do for people?

– What does it do to people?

– What does it do to the least well-off?

A Catholic theologian, an economist and two Catholic bishops told CNS they believe the basic principles of “Economic Justice for All” call for government to ensure that economic policy safeguards the markets from excessive greed and great disparity of wealth among the people and treats individuals in the labor pool with dignity, not just as profit-making tools.

All those interviewed agreed that unchecked self-indulgence was a key ingredient in the current economic crisis.

The late Pope John Paul II said Catholic tradition calls for a “society of work, enterprise and participation” which “is not directed against the market, but demands that the market be appropriately controlled by the forces of society, and by the state, to assure that the basic needs of the whole society are satisfied.”

He also said all economic life should recognize that we are all God’s children and members of one family, called to exercise a clear priority for “the least among us.”

“We have too many bad stewards of God’s gifts,” said Bishop John J. McRaith, 73, of Owensboro, Ky. “Too many people are starving. One thing that was not emphasized in the document that is really essential for any economic system is being a good steward and that no one really owns anything, but God.

“It’s not that God hasn’t given enough to go around, but that too many people are greedy and keeping more than their fair share,” he said.

Though the basic principles of “Economic Justice for All” are sound, the document itself is antiquated and should be updated, or scrapped and replaced with a modernized pastoral, said Andrew Abela, associate professor of marketing at The Catholic University of America in Washington.

“I think it needs to be retired and replaced with something else,” Abela told CNS. “We didn’t even have NAFTA (the North American Free Trade Agreement) then and think about the issues with immigration today. Think of the Internet and all that entails and how it’s become structured into our economy, and social justice for that matter. We should have a document that takes all of that into account.”

Since the core values in the document are still relevant, Bishop John C. Wester, 57, of Salt Lake City said that updating the pastoral may be an appropriate course of action.

“I do think that the economic pastoral has guidelines that allow us to look at what happened in this financial crisis and learn from it,” Bishop Wester said.

“There are so many people who are suffering from this crisis, especially people whose 401(k) has been wiped out, and those who are now at risk of losing their home,” he said. “If we update the pastoral, we need to examine how to prevent this from happening again.”

Any new document should emphasize the economy exists for the people and should provide each human with dignity, he said.

“We forgot about that,” Bishop Wester said. “The economy started to exist for profit only.”