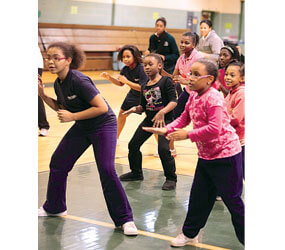 Throwing their hands in the air and moving their hips in time to syncopated Latin beats and African rhythms, fourth- and fifth-graders at Holy Angels Catholic School in Baltimore caught the Zumba craze during a special after-school class Oct. 20.

With their eyes firmly fixed on their instructor, Adelicia Villagaray, the youngsters jumped up and down, clapped their hands, twirled in place and executed sliding moves that got their heart rates up and brought smiles to their faces.

“It was so much fun,” said 10-year-old Janae Jacobs, a fifth-grader who was only slightly out of breath at the end of the lesson. “The hardest part was keeping up, because she’s really fast and she knows how to do it.”

“It’s more fun (than other forms of exercise),” she said. “You get to move around with your friends.”

Zumba is a dance-fitness program that alternates fast and slow rhythms. Designed as a “fitness party,” it is meant to be performed in groups. It is estimated that more than 12 million people take Zumba classes in more than 125 countries.

The Zumba experience was a first for Holy Angels School. The event was part of a regular series of activities in the Girls Reaching Out to Women (GROW) program, an initiative sponsored by the recreation committee of the Baltimore Chapter of the Continental Societies, Inc., to help girls enhance their self-esteem, learn leadership and conflict-resolution skills, and develop healthy habits.

“We want girls to feel good about themselves,” said Jill Johnston, recreation chair of the Baltimore Chapter of Continental Societies, Inc. “Part of that is being fit.”

The girls received a small journal to keep track of the food they eat and the amount of exercise they get each day.

“It’s good because it tells you what good foods to eat and what not to eat,” Nya said.

Villagaray, who teaches Zumba classes locally, said she was impressed by the youths’ enthusiasm. Squeals of delight echoed in the gym as the youngsters followed along in the class. Some students from Seton Keough High School joined in the class after seeing how much fun the younger girls seemed to be having.

“The goal of any kind of Zumba class – especially for me – is that I want to make them forget that they’re exercising,” Villagaray said. “Just get lost in the music and get lost in having fun.”

In an era of video games, smart phones and computers, Villagaray said, it can be challenging for some youths to get active.

“They don’t always get that chance at home,” she said. “It’s neat when I come here. They hear that music and they start to move.”