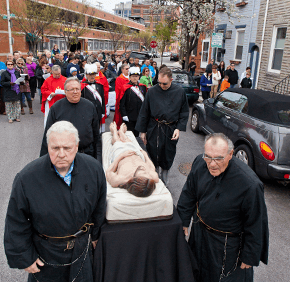 By Paul McMullen
pmcmullen@CatholicReview.org
Across Europe, legions of workers have fled the city for holiday. Many are cooling off in the Alps or on a Mediterranean beach; some are adding to the traffic at Yellowstone National Park. Rome, Paris and Madrid, meanwhile, are awash with American tourists, absorbing culture and calories.
Then there are those of us for whom summer vacation means four nights in an Ocean City condo.
Not to worry during the dog days of summer, however, as there are plenty of places in the Archdiocese of Baltimore in which to escape the heat and take in some fine European flourishes, while avoiding the hassle of trans-Atlantic travel and enjoying a quiet space for prayer and reflection.
In last Sunday’s Review in the Pew, Archbishop William E. Lori wrote about Our Lady of the Angels Chapel, on the campus of the Charlestown Retirement Community in Catonsville. I spent a lunch hour there in June with Sulpician Father Leo Larrivee, its pastor, as he pointed out the chapel’s Italian influences.
“Milan,” he answered, when asked which city was evoked through the marble and mosaics in the worship space, less than a mile off the Beltway, which once served a minor seminary chapel.
In Little Italy, of course, there is St. Leo the Great Church. The St. Gabriel Festival, the second of the two annual street festivals that benefit the parish, is Aug. 17-18. Before you listen to the Monaldi Brothers Band or the operatic bocce games, step inside Pallotine Father Sal Furnari’s church and learn more about the festival’s roots.
Want a taste of Prague, in the Czech Republic? Attend Mass at St. Wenceslaus, in the shadow of Johns Hopkins Hospital, or call Third Order Regular Franciscan Father Peter Lyons’ office to arrange a visit. The church was built by Bohemian immigrants, and the craftsmanship within is worth scrutinizing.
Looking for the old country of Krakow, Poland? Head to Holy Rosary, in upper Fells Point. During the school year, when the campus bustles with students from Cristo Rey Jesuit High School, assemblies double as a class in Art History.
The Shrine of St. Alphonsus on West Saratoga was designed in the German neo-Gothic style. In Cumberland, the Shrine of Ss. Peter and Paul shares similar roots, as does Holy Cross in Federal Hill.
There is a lot of Ireland in the Church of St. Patrick in Mount Savage, and a little in Blessed Sacrament, St. Brigid, St. Mary, Star of the Sea and St. Vincent de Paul in Baltimore.
Holy Rosary, St. Brigid and St. Leo the Great will be among the stops on a church tour planned by the Harbor East cluster for Sept. 14 (call 410-276-1981 for details). St. Casimir, St. Elizabeth of Hungary, Our Lady of Pompei and Sacred Heart of Jesus-Sagrado Corazón de Jesús are the other stops on a tour that will share the contributions of immigrants, then and now.
Paul McMullen is managing editor of the Catholic Review.
PrevNext