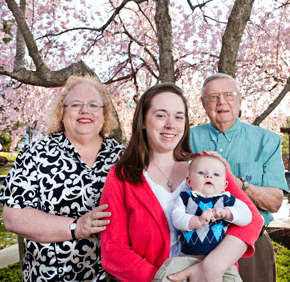 By Paul McMullen
pmcmullen@CatholicReview.org
BEL AIR – There are full and fulfilled lives, and then there is Deacon Stanley G. Piet, who, two days after marking his 94th birthday April 5, baptized one of his five great-grandchildren.
An admirable church and family man, Deacon Piet spent many years behind the scenes at the Catholic Center in Baltimore, organizing and vetting the myriad paperwork submitted to the Tribunal by men and women seeking to annul a marriage.
His own is a testimony to the institution. Mary, his wife of 63 years, has a pacemaker and some serious health issues. Troubled by the lack of attention she was receiving in a nursing home, he moved her back into their condo to supervise that care himself.
“She is an extraordinary woman,” Deacon Piet said, of one of the two great loves of his life.
“I live for the church,” he said. “I love Christ, I love what he taught us. I love what the church does for people. People don’t understand what the church does for the world.”
While the 50th World Day of Prayer for Vocations is April 21, that mission has been on his mind since the 1930s, when Deacon Piet’s spiritual advisor at St. Ann Parish in Baltimore was Father Thomas Caufield.
“One day,” Deacon Piet recalled, “he said, ‘Stanley, do you want to be a priest? I told him no, but that I was interested in becoming a Trappist lay brother. Then Uncle Sam (the American military) came along and said ‘We need you.’ ”
His faith matured at St. Matthew, Northwood, where he and his wife raised seven children and he entered the permanent diaconate; and is sustained at St. Margaret in Bel Air, where they have been parishioners since 1995.
Together, he and his wife researched and compiled a 1989 book titled “Early Catholic Church Records in Baltimore, Maryland, 1782 through 1800.” Therese L. Barrett, his middle child, said her father “knows so much about the history of the Archdiocese of Baltimore,” much of it gained firsthand.
He was a sexton, member of the Holy Name Society and helped organize the first parish council at St. Matthew Parish in Northwood. The Piets sent all seven children to the parish school, then invested high school tuition over a swath of Baltimore.
“Three of the boys went to Archbishop Curley, one to Calvert Hall,” Deacon Piet said. “Two of the girls went to Seton, the other to Mercy.
Retired from the Bendix Corp., Deacon Piet helped Mercy High when its groundskeeper took ill, which turned into a full-time position. By then, he was also a permanent deacon, when the modern diaconate was in its infancy.
“I was in the second class in the archdiocese, ordained in 1972,” Deacon Piet said. “There was no structure at the time, no money for training, it was just starting out. You were assigned to your home parish and told, ‘find a ministry.’ When I look at the training the guys get now, I don’t know how we did it. I guess it was the Holy Spirit.”
(It helped that he was a quick study, as Deacon Piet served the Army Air Force during World War II as an aerial gunnery instructor, despite having never fired a weapon prior to basic training.)
Receiving a transfer to St. Thomas More Parish, Deacon Piet preached three times a month, led its RCIA program and brought holy Communion to shut-ins. He was appointed a field advocate for the Tribunal in 1981, became procurator advocate in 1983 and continued to work there part-time even after his retirement from the diaconate in 1990.
“During my 35 years as judicial vicar, Stan Piet was of tremendous help and importance to all of us in the tribunal,” said retired Monsignor Jeremiah Kenney. “I can’t express what a wonderful deacon he is.”
Along the way, Deacon Piet chaired the archdiocesan deacon placement committee for five years. Later, after one of the deacons at his home parish became a widower, Deacon Piet approached him with a suggestion.
“I told him, ‘You know, you could become a priest, too,’ ” Deacon Piet recalls.
In 2010, that acquaintance from St. Margaret in Bel Air joined his son in the priesthood, but the encouragement Father Gregory Rapisarda received was nothing new for Deacon Piet.
“I’ve always encouraged the laity to get involved,” said “I’ve invited people to join the diaconate.”
He baptized all but the oldest of his 14 grandchildren. What is it like to baptize your great-grandchildren?
“I feel elated, “he said, “starting this child in a life of Christ.”
PrevNext