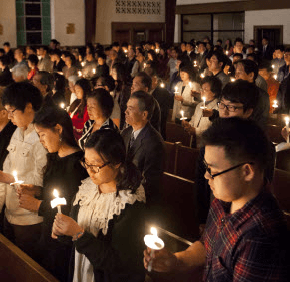 Today he is a parishioner of Holy Korean Martyrs in Woodlawn, where three of the four weekend Masses are said in his native language. The parish helps Lee keep both his Catholic and Korean identity, he said.

“God wants to keep our community together,” he added.

“When people come (to the United States), they feel like strangers in American parishes,” he said, “That is why a Korean parish is needed.”

As a young priest of the Archdiocese of Daegu, Korea, Father Kim recognized the need for Korean-language parishes in America while visiting family in California. In 1984, he traveled to Boston, where he ministered to Korean immigrants. He became the pastor of the Baltimore-area Korean Catholic community in 1988, and he was incardinated into the Archdiocese of Baltimore in 2002.

According to the Washington, D.C.,-based Migration Policy Institute, Korean immigration has not kept pace with other immigrant groups in the past two decades, a trend Father Kim has noticed. With fewer Korean immigrants, the long-term future of Holy Korean Martyrs is uncertain, he said.

On Saturdays, parish volunteers teach Korean language classes for children, which about 70 students attend. Holy Korean Martyrs also celebrates the Korean New Year in February, which falls on the first day of the lunar calendar.

Baltimore-area Korean Catholics began worshipping together at Immaculate Heart of Mary, Baynesville, in 1972. In 1976, the congregation moved to St. Bernard, Waverly, and became St. Bernard’s Korean National Parish in 1989.

In 1997, it moved to the former St. Lawrence Parish in Woodlawn, taking the name Holy Korean Martyrs but keeping St. Lawrence’s western-style statues and Stations of the Cross. The parish’s name above the entrance is in Hangul, the Korean alphabet.

The parish has about 400 active families, Father Kim said. Each is assigned to one of 33 small groups, which meet weekly for prayer, Scripture reading, food and fellowship.

Those small groups also compete against one another each September in a music contest, part of a parish festival commemorating the Korean martyrs for whom the parish is named. More than 10,000 Koreans were martyred in the 19th century for practicing the Catholic faith; Pope John Paul II canonized 103 of them in 1984.

The parish does charitable work through its Manna committee, which holds an annual fundraising event and sends funds to international organizations and local causes, such as Our Daily Bread.

The parish also helps new Korean immigrants – usually three to five families per year – with needs such as securing identification, finding a place to live and opening a bank account.

The parish also has a relationship with a community of Korean religious sisters, who send members to serve the parish in three-year rotations.

The sisters lead the parish’s religious education program, which is housed in a former Catholic school on the parish’s eight-acre campus. Situated on a wooded bluff overlooking Security Boulevard, the campus also includes a former convent, which the parish rents to retreat groups.

Father Kim jokes about how he thought his English would improve after he moved to the United States. It hasn’t, he said.

“I live with Korean people,” he said. “I forget English day by day.”

Established as a Korean National Parish: 1989