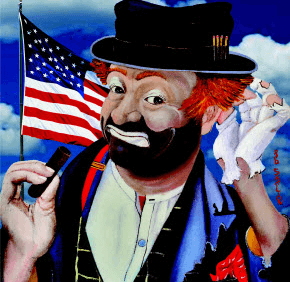 Drive by a car dealership and you might see banners with the dealer’s name clipped to the windows of the featured vehicles. Sports fans might profess their love of the home team with similar flags flying from their cars (Go Ravens!). But when it comes to a real sense of pride, nothing beats the flag of one’s country.

With Flag Day, June 14, upon us, it seems appropriate to pay tribute to the American flag, that star-spangled banner immortalized in poem and song nearly 200 years ago at Fort McHenry. When compiled in the right configuration, these 50 stars and 13 stripes represent more than bits of red, white and blue cloth and thread. They represent dedication, and the fight to win and preserve freedom that make the United States unique.

Years ago, the actor-comedian-clown-artist Red Skelton, who was Catholic, often performed a sketch in which he recalled a teacher from his elementary school days. He told the students one morning that he had noticed their recitation of the Pledge of Allegiance to the flag had become monotonous and stale. The teacher then asked if he could take a few moments to go through the pledge, explaining the meaning of each word or phrase. From Skelton’s Jan. 14, 1969, TV performance, he takes it from here:

“I – meaning me, an individual, a committee of one.

“Pledge – dedicate all of my worldly goods to give without self-pity.

“Allegiance – my love and my devotion.

“To the Flag – our standard, Old Glory, a symbol of freedom. Wherever she waves, there is respect because your loyalty has given her a dignity that shouts freedom is everybody’s job.

“United – that means that we have all come together.

“For which it stands!

“One nation – meaning, so blessed by God.

“Indivisible – incapable of being divided.

“With Liberty – which is freedom, the right of power to live one’s life without threats or fear or some sort of retaliation.

“And justice – The principles or quality of dealing fairly with others.

“For all. – which means, boys and girls, it’s as much your country as it is mine.”

In character, Skelton then recited the pledge, after which he noted, “Since I was a small boy, two states have been added to our country, and two words have been added to the Pledge of Allegiance, ‘under God.’ Wouldn’t it be a pity if someone said, ‘That is a prayer’ and that would be eliminated from schools, too?”

Skelton was right: Much like anything we do regularly, things done by rote often lose their impact. This can be a good thing, such as getting in the habit of putting on a safety belt when you get in a car; eventually, it’s second nature and you do it without thinking. However, as we learned recently with the introduction of new translations of prayers in the new Roman Missal, sometimes we recite things so often that the words spill out of our mouths with no connection to our brain. Then the words lack context, feeling and emotion. It helps to take some time to think about the concepts in the Lord’s prayer, or the Creed, or – in this case – the Pledge of Allegiance as a comedian and clown could interpret so eloquently.

So this Flag Day, as we see the Stars and Stripes hanging from homes and offices and flagpoles, think about these individual communities united by a common purpose. Think about the freedom from threats or retaliation. Think about fairness, dignity and loyalty. Remember this flag, a symbol “that shouts freedom is everybody’s job.”

And as Red Skelton would say as he ended his TV show, “May God bless.”