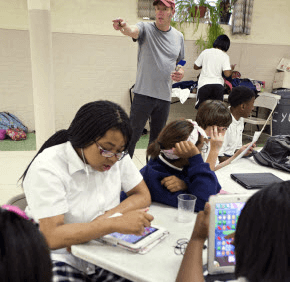 By Elizabeth Lowe
elowe@CatholicReview.org
Twitter: @ReviewLowe
“Can you be more sarcastic?” Andy Bopp asked Nehema Nkere as she recited one of her lines in St. Francis of Assisi School’s upcoming spring musical.
Bopp, the physical education and music teacher at the Baltimore school, is the writer, director and producer of “iPad – The Musical.” The only performance is May 21 in St. Francis’ parish hall.
The comedy, which Bopp said pokes fun at “The Wizard of Oz,” is about a brother and sister who get sucked into an iPad and have to find their way out. During their quest, they encounter more than a dozen applications, including weather, mail, Facebook, reminders and camera.
“The kids got iPads at school this year and I said, ‘what a funny idea if you got sucked into the iPad,’ ” Bopp said. “I come up with the idea, or sometimes the kids come up with the idea, and I sit down and figure out what I want to do. The best ideas come from the kids, not from me.”
Bopp writes, directs and produces two plays each school year – the first around Christmas, the second in the spring. This is his 11th musical at St. Francis.
“I try to incorporate dancing, singing, acting,” said Bopp, a guitarist and songwriter. “I try to get them to do stuff they wouldn’t normally do. You know the personalities of each kid and you put them in different things.”
Nehema, an eighth-grader at St. Francis, is one of 55 students in grades five through eight in the 45-minute play. Rehearsals began in early April.
“It’s awesome, it’s cool, it’s extraordinary because nobody does stuff like this,” said Nehema. “Mr. Andy, he does the most creative stuff.”
“They learn how to work with others, how to be part of a huge machine and make the machine run,” Bopp said. “The main thing is confidence building. What happens is the kids rise to a different level.”
During rehearsal May 8, some students painted scenery, which is mostly cardboard, while others jumped on and off the moveable stage to dance and run through the script.
As students rehearsed their lines, Bopp provided feedback: “too fast”; “you have to be a lot louder”; and “if the audience is laughing, you have to pause.”
“I like being a part of it because it’s fun, it’s an after-school thing where I get to interact with my friends,” said Rodney Horton, a seventh-grader at St. Francis whose character is the boy who gets sucked into the iPad. “It’s fun and it’s pretty creative. I made a couple of my lines. It’s easier to learn the lines I write myself.”
“iPad – The Musical” will be performed May 21 at 7:30 p.m. at St. Francis of Assisi, 3617 Harford Road, Baltimore. The event is free and open to the public.
For information, call 410-467-1683.
Also see:
Calvert Hall principal to retire after nearly five decades at Towson school.
Latest school news from around the Archdiocese
Copyright (c) May 11, 2013 CatholicReview.org
PrevNext