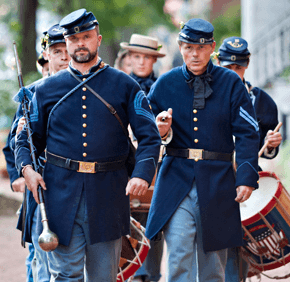 Dressed in the blue uniform of a Union Army major and standing in a large assembly room on the campus of the Visitation Academy in downtown Frederick Sept. 22, Dr. Joseph Berman spoke reverently as he recounted the horrors and heroism that took place in that exact spot 150 years ago.

Days after the Sept. 17 Battle of Antietam – the bloodiest one-day battle of the American Civil War, hundreds of wounded and dying soldiers began arriving at Visitation Academy, he said. The Catholic boarding school, staffed by Visitation Sisters, had been converted into General Hospital No. 5. Numerous amputations were performed there as doctors did their best to save lives and Daughters of Charity from Emmitsburg served as nurses.

“There was terrible suffering that went on in this facility,” Berman explained, noting that surgery was performed upstairs and many of the wounded soldiers suffered from disease and dysentery.

“This place was picked because this room for a hospital in 1862 was ideal,” Berman said. “It was well ventilated, and physicians felt that the movement of fresh air helped you heal. The problem was that with the open windows, flies and mosquitoes came in.”

“We are the only school in Frederick City that continued to teach during the Civil War – and we are very proud of that,” said Lynne Kirby, principal of the all-girls school.

The Visitation Sisters, a cloistered community of nuns, took over operation of the school from the Sisters of Charity in 1846, remaining there until 2005.

Kirsten Tydings, special events coordinator at Visitation Academy, noted that the 67 students stranded at the school during the war lived with the sisters in the monastery.

“We have letters from the era that speak of oppressive conditions,” she said. “Over 100 people died here. It was very noisy and there was a lot of screaming.”

“Their descriptions are absolutely graphic,” Sister Betty Ann said. “The victims were lying in the sun, and the sisters created shaded tents for them.”

An account of Antietam written by Sister Matilda Coskery described the battle as a “terrible engagement.”

“The wounded of both armies still lay here,” she wrote, “many with only a blanket for bed, and another stretched over them by sticks being drivers in the earth at the head & feet of the poor wounded men, lay here & there, sometimes two men lay thus under one shelter, and with every filth their condition occasioned lay around them.”

At General Hospital No.5, Berman noted that 9 in 10 survived – a “pretty good number” for the time, he said.

“The sisters here were into cleanliness and they washed this place all the time,” he said. “They had bleach and bromide.”

A Frederick resident who lives across the street from Visitation Academy (no longer a boarding school and no longer staffed by Visitation Sisters), Berman said he was moved to participate in the commemoration.

“To me, it’s almost mystical that all of this actually happened right here,” he said.