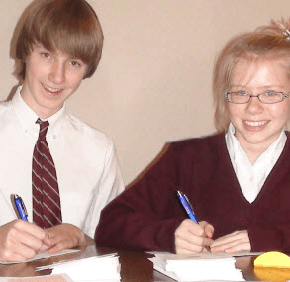 As nearly 300 students from St. Stephen School in Bradshaw immersed themselves in a Lenten retreat March 5-6, it may have been the kindergarten class who summed up its message best.

Joining hands, the children gleefully moved in a circle as they joined Franciscan Sister Angela DeFontes in singing “Be the hands, the heart of God. Go into the world and share God’s spirit … Save a little bit and pass it on.”

Sister Angela, the school’s director of religious education, told the young pupils that “passing it on” is exactly what she hoped they would do.

The energetic students got a chance to do just that when they moved to the next station of the retreat, where they packaged personal items such as toothbrushes, mouthwash and deodorant to be donated to a women’s detention center, where a Franciscan Sister serves as a chaplain.

“They understand what they’re doing,” Sister Angela said of the students. “They are ministers of compassion so we try to help them make the connection of what God is calling them to do as Catholic Christians.”

Students from kindergarten through the eighth grade participated in the annual retreat, which was organized by Franciscan Sister Rose Mary Eve Holter. Sister Angela said the theme was “God’s Extravagant Love: We’re all brothers and sisters in Christ.”

In addition to bagging hundreds of items for the women, the students also wrote messages of hope.

Eighth-grader Sarah Bussard said it felt good to help people who don’t have basic necessities. She said her message to the women of the detention center was “reassuring them that God’s always with them and they are never alone.”

Her classmates Julia Arbutus and Luke Sparr said that they also learned about other countries and heard testimony from three parishioners who traveled abroad to help others.

Sister Angela showed a video of St. Stephen graduate Jessica O’Brien, who traveled to Panama to do volunteer work.

Principal Mary Patrick said this is the third year students have participated in the retreat.