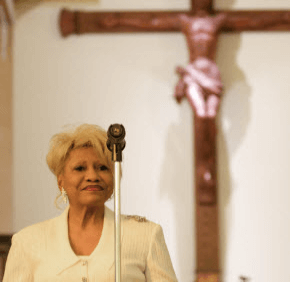 Churches have a number of reasons to celebrate throughout the year, but one church in northwest Baltimore is celebrating an occasion that does not happen for many establishments.

The parishioners of New All Saints Church are in the midst of their centennial celebration. The festivities began in October 2011 with a rededication of the church’s rectory, which originally served as the church’s chapel when ground was broken back in the fall of 1911.

They have had a number of events take place during the celebration, which is to end in October of this year, including a Mass at the Basilica of the National Shrine of the Assumption of the Blessed Virgin Mary, a jazz vespers service, and a Mass paying homage to Father Charles Randolph, the first black priest ordained in America. On Feb. 26, the church had a recital concert featuring Dr. Hattie Shannon, accompanied by Dr. Kenneth Dean.

While reflecting on the history of the church, the parishioners are also more than eager to see what’s in store for the next 100 years. In doing so, the theme for their celebration is, “Entering a New Century: Recalling, Reclaiming, Renewing,” aimed at current, former and potential members.

“We hope they would have a knowledge of the history of one of the great churches in Baltimore,” said Dr. Thelma Daley, the chair of the Centennial Committee. “In this journey of Catholicism, we hope they learn more about it and that they themselves will renew their faith and develop a greater appreciation of their faith, and their church, and of each other.”

When coming up with a theme for the celebration, Father Donald Sterling said keeping in touch with the church’s past was paramount.

“We looked at what we wanted to see at the end of this, which is to know what we are as a parish,” Father Sterling said. “The intent is to bring forth our history as a parish and a people and to build up our membership and to reach out to others, as well as finding the sense of wisdom and spiritual power that’s needed to renew our faith and go forward.”

There has also been talk of bringing back former staff members, priests, and clergy he said, as well as those who attended the school. They would also like to invite the family of the first pastor of All Saints, Father Timothy Kenny, he said.

There’s also been a noted shift in the make-up of the church. While a predominantly African-American parish, the number of members from the Caribbean and Africa has increased. Father Sterling called this a holistic shift, saying that the church has welcomed and encouraged those members to share how they can further enrich the church.

The surrounding community is also important to the church Father Sterling said, and he hopes that more can be done to reach their neighbors. He said those in the community see the church as a cornerstone.

“As far as retail growth in the community, we’re right in the middle of all of that,” Father Sterling said. “My hope is that we can do a greater evangelization process in the neighborhood, from a faith context. But people do know that we’re in the neighborhood, there’s no doubt about that.”

Daley said thus far, parishioners have been enthusiastic and more than receptive to the celebration, noting how the church was packed for the recital concert that followed its black history month Mass. She said she anticipates the celebration being a boon for the greater good of the church.

“I think it will be a healthy experience, in terms of enhancing beliefs, connections, and one’s well-being in terms of being in God’s house and God’s world, and understanding how it all connects to the archdiocese – we’re part of the whole,” Daley said.