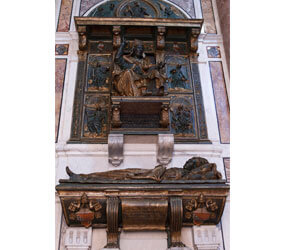 VATICAN CITY – With help from the Knights of Columbus, the only papal tomb transferred from the old to the new St. Peter’s Basilica has been restored.

Cardinal Angelo Comastri, archpriest of St. Peter’s Basilica and president of the office responsible for the basilica’s upkeep, rededicated the tomb of Pope Innocent VIII during a brief ceremony attended by leaders of the knights Dec. 5.

The gilded bronze monument created by Antonio del Pollaiolo in the late 1400s originally was placed in the old St. Peter’s Basilica. Work on the current basilica began in 1506 and the tomb of Pope Innocent was placed in the church in 1621.

Located in the southern nave of the basilica, the monument contains two figures of Pope Innocent: one lying on top of the sarcophagus and the second sitting on a throne above the tomb. On the sides, there are depictions of the four cardinal virtues: prudence, justice, temperance and fortitude. The top of the monument depicts the three theological virtues: faith, hope and charity.

Tuccio Sante Guido, the restorer who led the work, told Catholic News Service, “I approached the monument as you would approach a sick person,” taking care to remove the damage of time and of previous restoration attempts.

Before unveiling the monument, Cardinal Comastri addressed Supreme Knight Carl Anderson and presented him with a reproduction of the tomb’s allegorical figure of Charity.

“May this gift, deliberately made for the Knights of Columbus, be a sign of gratitude of the Fabbrica di San Pietro for your silent, humble, and invaluable contribution,” the cardinal said.

He also presented a frame bearing Del Pollaiolo’s signature that the restorers had found.