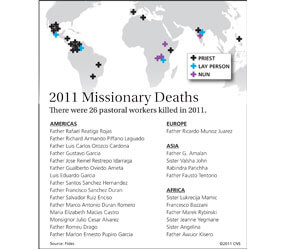 VATICAN CITY – At least 26 Catholic pastoral workers were killed in mission lands or among society’s most disadvantaged communities, although they were more often the victims of violent crimes than persecution for their faith, said a Vatican news agency.

Each year, Fides, the news agency of the Congregation for the Evangelization of Peoples, publishes a list of pastoral workers who died violently. The 2011 list was released Dec. 30.

The agency said that over the course of the year, it registered the deaths of 18 priests, four religious women and four laypeople. Twenty-five church workers were killed in 2010 – a figure down from an unusually high number of 37 workers murdered in 2009.

For the third consecutive year, the Americas, particularly Latin America, registered the most murders with the death of 13 priests and two laypeople: seven in Colombia, five in Mexico and one each in Brazil, Paraguay and Nicaragua. Six pastoral workers were killed in Africa, four in Asia and one priest was killed in Europe.

In their commitment to serving the needs of others, the men and women made their own safety their last priority, Fides said.

Like other years, “many were killed in an attempted robbery or kidnapping that ended badly, caught in their homes by bandits in search of imaginary riches. Others were killed in the name of Christ by those opposing love with hatred, hope with despair, dialogue with violent opposition, the right to perpetrate abuse,” it said.

– A nun identified only as Sister Angelina, who was killed by militants of the Ugandan guerilla movement, the Lord’s Resistance Army, while she was taking medical assistance to refugees in South Sudan.

– Maria Elizabeth Macias Castro, a member of the Scalabrinian Lay Movement in Nuevo Laredo, Mexico, who assisted migrants and was kidnapped and murdered by drug dealers.

– Sister Valsha John of the Sisters of Charity of Jesus and Mary was killed in her home in northern India. She helped protect indigenous communities from being driven from their lands by coal mining companies. She had been repeatedly threatened by criminals who had warned her not to interfere, but government authorities reportedly ignored her requests for help and left her without protection, said Fides.

Fides said its provisional list only includes pastoral care workers, not the many other Catholics who died for their faith this year such as the late Pakistan minister of minorities, Shahbaz Bhatti, and those killed in the bombings of Christian churches in Nigeria on Christmas.