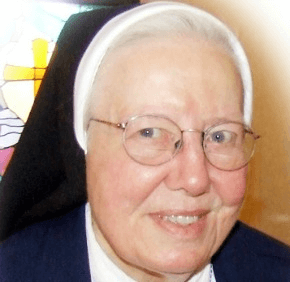 By Catholic Review Staff
A funeral Mass for Ursuline Sister Mary Terence Schmitt was offered Nov. 21 at the Ursuline Motherhouse in Louisville, Ky., Nov. 21. Sister Mary Terence was 96 when she died at Nov. 16 at Sacred Heart Home in Louisville.
A native of Dalton, Neb., Sister Mary Terence joined the Ursuline Sisters of Louisville in 1938, and taught religion, algebra and home economics at Bishop Walsh School in Cumberland from 1961 to 1970. She also served schools in Kentucky, Nebraska, Pennsylvania and West Virginia.
In her later years she ministered at social services agencies in Pittsburgh and then as a pastoral assistant at a mission church in Salyersville, Ky. She was a graduate of Ursuline College, Louisville, and held a master’s degree from St. Louis University.