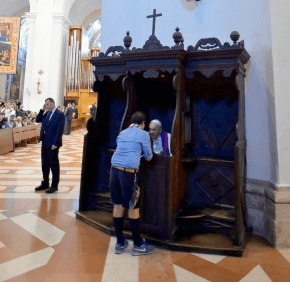 VATICAN CITY – The Apostolic Penitentiary has nothing to do with a jail cell and everything to do with ensuring repentant sinners experience God’s mercy.
Established in the 12th century when penitential pilgrimages to Rome began to bring thousands of faithful to the city seeking absolution of their sins, much of the office’s work is covered by anonymity and the absolute secret of the confessional seal.
But this summer the office, officially a tribunal, offered a little glimpse into its main areas of concern when it published “Sin, Mercy, Reconciliation: A Theological-Pastoral Dictionary.”
The book, available only in Italian for now, features a presentation by Pope Francis, who lauds the staff’s “service, which by its nature unfolds in the most discreet silence.”
However, he wrote, “this ancient dicastery’s numerous initiatives to tell the world of the marvels of the mercy of God have not gone unnoticed.”
One of those projects is the dictionary, which, the pope said, “is based on the contribution of scholars used to pastoral practice.”
That experience, the pope wrote, is translated into practical suggestions, particularly for the celebration of the sacrament of reconciliation, which plays “a fundamental role in the marvelous embrace between return (to God) and forgiveness.”
“God’s faithfulness is unchanging, infinite and continues to exist and produce fruits despite the infidelity of creatures,” Pope Francis said.
Cardinal Mauro Piacenza, who heads the Apostolic Penitentiary, said the book was written to help pastors and Catholic faithful “discover the beauty and efficacy” of confession.
The book has 60 entries beginning with “accoglienza” – on the importance of giving a warm “welcome” to penitents when they arrive for confession – to “viaticum,” which refers to the Eucharist given to a person about to die.
The entry on divorced and civilly remarried Catholics noted that their eventual admission to the sacraments has been the subject of theological and public debate. But, even citing Pope Francis’ apostolic exhortation on the family, the book said such couples cannot receive absolution in confession and Communion without an annulment of their original marriage or without abstaining from sexual relations in their new union.
Msgr. Livio Melina, president of Rome’s Pontifical John Paul II Institute for Studies on Marriage and Family, wrote the dictionary’s entry, which insisted divorced and civilly remarried Catholics are still members of the church and are to be welcomed, accepted and accompanied.
Like Pope Francis, Msgr. Melina said the personal situation of each couple must be examined and dealt with in a way appropriate to that couple. However, he wrote, even if a divorced and civilly remarried Catholic is “not subjectively culpable” for violating his or her sacramental marriage vows, objectively the person is living in a state of sin and cannot receive the sacraments.
Not everyone agrees with his assessment. For example, Austrian Cardinal Christoph Schonborn of Vienna, whom Pope Francis chose to present “Amoris Laetitia” (“The Joy of Love”) to the public in April, said, “It is possible, in certain cases, that the one who is in an objective situation of sin can receive the help of the sacraments.”
In an interview in July with La Civilta Cattolica, a Jesuit journal reviewed by the Vatican prior to publication, the cardinal said the pope’s exhortation “takes greater account of those elements that suppress or attenuate imputability” of a Catholic in a second union and seeks a path that would move that person closer to the fullness of what the Gospel demands. Absolution and Communion could be the medicine such a person needs, he said.
Less controversially, the Apostolic Penitentiary’s book includes detailed instructions for pastors who encounter a penitent confessing a sin whose absolution is reserved to the Holy See. Those sins, which result in automatic excommunication, include: profanation of the Eucharist, violation of the seal of confession, absolving someone the priest had sex with, a physical attack on the pope, the consecration of a bishop without papal mandate and the attempted ordination of a woman.
The confessor must write to the Apostolic Penitentiary for authorization to absolve the penitent and lift the excommunication; usually, it said, the office will mail a response within 24 hours. Delivery time, of course, depends on the local post office.
The book suggested the letter be written on a typewriter or computer to guarantee it is legible. It can be written in any language, but the office is best with “Italian, English, German, French, Spanish, Portuguese, Polish, Slovakian or Latin,” it said.
To preserve the secret of the confessional, “cases are always presented with fictitious names,” the book instructed.
And, it said, “recourse to this tribunal is absolutely free, and voluntary offerings are not accepted.”
While the vast majority of Catholics will never have any direct contact with the Apostolic Penitentiary, each year tens of thousands of people receive the sacrament of reconciliation from a priest who answers directly to the office: the full-time confessors who offer the sacrament in a dozen languages at St. Peter’s Basilica and the Rome basilicas of St. Mary Major, St. John Lateran and St. Paul Outside the Walls.
For Pope Francis, getting people to confession is a key part of the Year of Mercy. “Even in the darkness of sin, a minimum of openness to divine grace can be truly important for our inner transformation,” he wrote in the book.

Mother Teresa knew what being unloved felt like, priest says