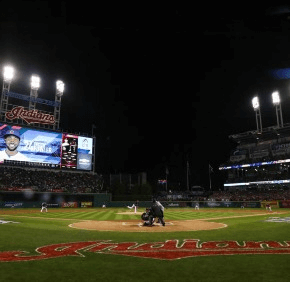 By Catholic News Service
CHICAGO – When civic leaders make friendly bets on which team will win a big championship with their counterparts in another city, one winner enjoys a feast, while the loser eats some humble pie.
But when bishops in the World Series’ home cities placed their wager on the winner of the Fall Classic, it turns out that while only one team could win, poor people in both cities also will win.
Cardinal-designate Blase J. Cupich of Chicago said that, in celebration of the Chicago Cubs ending a 108-year World Series championship drought, he would make good on his end of the bet and provide enough Chicago deep dish pizzas and baked goods to feed more than 100 guests of the Bishop William M. Cosgrove Center in Cleveland.
“Both teams put up a great effort, both cities very much wanted this victory, and today Chicago is giving thanks for this blessing,” said Archbishop Cupich in a Nov. 4 statement. “Our city is celebrating with our Cubs, and we want to include our friends in Cleveland.”
For his part, Bishop Richard G. Lennon of Cleveland said a Cleveland-style meal of pierogi, kielbasa, sauerkraut and green beans would be on its way to feed more than 100 people at the evening supper program for the homeless sponsored by Catholic Charities of the Archdiocese of Chicago.
“Although we hoped the Indians would come out on top, we humbly accept our defeat and congratulate our friends to the west in Chicago,” said Bishop Lennon in a Nov. 4 statement. “We are thankful for the pizzas and dessert, and hope Chicago enjoys a taste of Cleveland on us. We’ll be back next year!”
The Cubs beat the Cleveland Indians 8-7 in 10 innings Nov. 2 in the climactic Game 7 of the World Series, which featured a game-tying home run in the bottom of the eighth inning by Cleveland’s Rajai Davis, only to see the tied contest delayed by rain after nine innings were played. The Cubs scored twice in the top of the 10th inning. Davis singled in a run with two out in the bottom of the inning, but Cleveland could draw no closer.
The Cosgrove Center in Cleveland provides guests with access to such fundamental services as hot meals, shower facilities, mail distribution, and many other forms of assistance. In addition, the center offers referrals to employment and training programs, health and mental health screenings, Veteran Administration benefit help and aid with obtaining housing subsidies.
Catholic Charities’ evening supper program for the homeless feeds approximately 135 individuals at each meal. It is just one of 150 programs, at 153 locations, run by Catholic Charities Chicago, assisting more than 1 million persons each year.