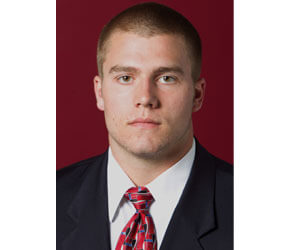 LITTLE ROCK, Ark. – The Catholic community in Little Rock and Fayetteville joined the rest of the state in mourning the death of University of Arkansas football player Garrett Uekman.

As a testament to what classmates, friends and family members thought of Uekman, a string of candlelight vigils, rosaries and prayer services were held in both areas before his Nov. 28 funeral Mass at Christ the King Church in Little Rock.

More than 1,100 people attended his funeral, including coach Bobby Petrino, a member of St. Joseph Church in Fayetteville, as well as university officials and football players.

Uekman, 19, played in a televised game against Mississippi State Nov. 19 at War Memorial Stadium in Little Rock, the same venue where he played for Catholic High School. He returned to Fayetteville that night, but the next morning he died from an untreated heart condition.

On Nov. 25, Uekman was remembered during one of the Razorbacks’ biggest games in decades, a loss to No. 1 Louisiana State University in Baton Rouge. Stickers, posters and arm bands with “88,” Uekman’s jersey number, were often seen as memorials to the player.

At the conclusion of the Mass, Steve Straessle, principal of the high school who also taught Uekman, said the former student’s legacy will be that he lived the school’s motto: “Never be a bystander.”

“If your faith is tested, defend it. If someone is hungry, feed him. If one is downcast, encourage him. If your test is difficult, prepare for it. If your friends are in trouble, step up. If the little guy needs you, be there,” he said.

Straessle said even as a freshman Uekman presented himself as a role model.

“He stood out as a gifted athlete and one of the smart kids, but more importantly he slowly built a solid reputation as a man of faith, a man who respected and adored his family. To say that the other boys looked up to Garrett Uekman is to say that Mount Everest is a mountain. He was just that good.”

A prayer service was held Nov. 22, two days after his death, at his home parish, Immaculate Heart of Mary in North Little Rock, to unite the 17 classmates with whom he had graduated from eighth grade in 2006.

“He was such a wonderful student. He excelled at everything. He always gave 100 percent. Everybody looked up to him,” said Christie Powell, the parish’s youth and religious education director. She taught Uekman religion and art in grade school.

Uekman went on to Catholic High School, graduating in 2010. In 2008 as a sophomore, he was on the state championship basketball team. With 37 seconds left to play in the championship game, Uekman rebounded a shot and put it in for two points to give his team the lead.

On the high school football team, he was a tight end and was heavily recruited in the spring 2010. His dream was to play for the University of Arkansas and wanted to make his “mark” in football. This season he played nine of the 11 games for the No. 6 Razorbacks as a tight end.

While in college, he attended Mass at St. Joseph Church and St. Thomas Aquinas University Parish in Fayetteville, but he still could be found often at Immaculate Heart of Mary attending Mass with his parents and sister.

Powell said she was not surprised to see him play football on Saturday and on Sunday morning he’d be sitting with his family in the usual pew.

Father John Antony, pastor of St. Joseph Church in Fayetteville, said he had met the Uekmans when they attended Mass in Fayetteville. He knew the family casually, Father Antony said, but understood the honor student to be “a rather extraordinary young man, both serious student and dedicated athlete.”