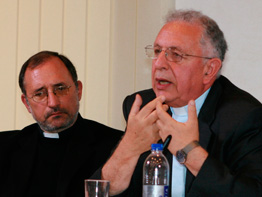 ROME – A nation that lacks freedom of religion is stunting its own social, economic and political development, said speakers presenting an annual report on religious freedom around the world.

Religious freedom guarantees the establishment and protection of democracy and “without religious liberty, there can be no democracy or peace in the world,” said Father Joaquin Alliende Luco, president of Aid to the Church in Need.

Aid to the Church in Need, a Catholic organization funding religious projects in 136 countries, released its annual report at a press conference Oct. 23 in Rome. The report compiles information directly from the churches the aid agency assists, news articles, official government documents and human rights organizations.

One of the panelists presenting the 2008 report, Father Bernardo Cervellera, who heads the Rome-based missionary news agency AsiaNews, said violations of religious freedoms impoverish a nation.

He said today violence against people professing a particular religion decreasingly stems from “irrational fundamentalism,” colonialism or political ideologies. Instead, such aggression is mostly “simply motivated by power,” said the Italian priest.

For example, Father Cervellera said, while some of the recent violence aimed against Christians in India is perpetrated by fundamentalist Hindus who are opposed to growth in Christianity and conversion to Christianity, those primarily orchestrating the oppression are “people who absolutely want to keep the (Christian) population at a level of total slavery.”

The people in control are aiming to “block the social situation” of Christians, especially those who may be poor, underskilled laborers or belong to lower castes, he said. But by trying to stagnate the social condition of its people, India is “reducing its own value,” and “blocking religious liberty means impoverishing India today,” he said.

Another example is China, he said, which has become “an enormous cauldron of revolt” brewing and ready to boil over.

He said China stands at an important crossroads: It can continue to clamp down and control every aspect of religious activity in its country or it can forge a new path toward full religious freedom.

Father Cervellera said granting greater religious liberties would help China overcome many of its social and political difficulties, such as corruption.

He said it would mark the start of the government having a whole new relationship toward its citizens – a relationship that would no longer be based on absolute control but on dialogue.

Also, the different religious groups can help “create a climate of social reconciliation inside an already very tense Chinese society,” he said.