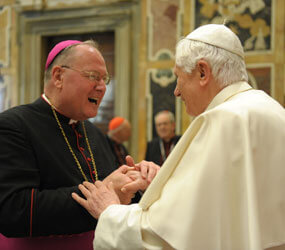 Archbishop Timothy M. Dolan of New York greets Pope Benedict XVI in Clementine Hall at the Vatican during a birthday celebration for the pope April 16. Archbishop Dolan is a trustee of the U.S.-based Papal Foundation

VATICAN CITY – Pope Benedict XVI received a cake on his 83rd birthday from the U.S.-based Papal Foundation, which also presented him with a list of the projects they have funded in his name this year.

The 120-member group sang “Happy Birthday” to the pope as they presented him with the fresh strawberry and kiwi custard cake. Written on top was the message, “Happy Birthday, Holy Father.”

There were no candles to blow out, so the pope responded to the song by giving the group his blessing.

In his formal speech to foundation members, the pope spoke about the joy of the Easter season, which is built on knowing that “evil never has the last word, that love is stronger than death, and that our future and the future of all humanity lies in the hands of a faithful and provident God.”

The Papal Foundation was established in 1990 and, in the name of the pope, has given about $60 million in grants for the building of churches, seminaries, schools, hospitals and other projects for the care of the poor around the world.

James V. Coffey, foundation vice president, said this year the foundation distributed 95 grants and 60 scholarships worth a total of $6.2 million. The scholarships help priests and nuns studying at the pontifical universities in Rome.

The members also gave the pope a copy of the book, “Peter’s Partners,” which marks the 20th anniversary of the Papal Foundation.

The “practical witness of holiness and charity” by Catholics around the world allows the church to continue to proclaim the message of hope, he said.

“The Papal Foundation has advanced this mission in a particular way by supporting a broad spectrum of charities close to the heart of the successor of Peter,” the pope said.

Pope Benedict asked the foundation members and staff “to pray for the needs of the universal church and to implore a renewed outpouring of the Spirit’s gifts of holiness, unity and missionary zeal upon the whole people of God.”