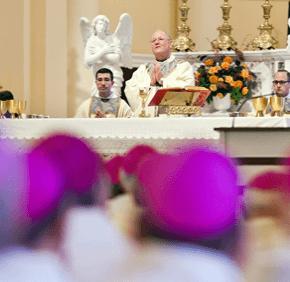 By Elizabeth Lowe
elowe@CatholicReview.org
Twitter: @ReviewLowe
More than 150 of the nearly 300 U.S. bishops gathered to celebrate Mass at 7 a.m. Nov. 11 at the Basilica of the National Shrine of the Assumption of the Blessed Virgin Mary in Baltimore prior to the start of the U.S. Conference of Catholic Bishops’ general assembly in Baltimore Nov. 11-14.
Cardinal Timothy M. Dolan, archbishop of New York and president of the USCCB, was the principal celebrant. This is his third and final year as the bishops’ president.
In an exclusive interview with the Catholic Review following the liturgy, Cardinal Dolan discussed his experiences in Baltimore prior to his first bishops’ fall assembly in 2001.
Watch Cardinal Dolan’s exclusive interview with the Catholic Review below:
“I was able to go back to the Catholic University of America in Washington, D.C., to do my doctorate,” Cardinal Dolan said, “and it was in the history of the Catholic Church in the United States, so I was here a lot. You could call it almost field trips coming here and studying the place. That was way back when – late 70s, early 80s.”
He noted that five years ago then-Archbishop Edwin F. O’Brien invited him to Baltimore.
“Cardinal O’Brien asked me to come speak in 2008 at the bicentennial of the Diocese of Baltimore becoming the Archdiocese of Baltimore, our first archdiocese,” Cardinal Dolan said. “He asked me to give a talk on John Carroll so I was here then, so I’ve been here a lot. It’s like coming home.”
He continued, “Baltimore holds pleasant memories as an American because it’s so historic, as a Catholic American because it’s our first diocese, as a priest because when I was a graduate student at the Catholic University of America I used to help on weekends at Our Lady of the Fields in Millersville … so I’ve always felt close here.”
When it comes to cuisine, the cardinal shared his favorite Maryland dish.
“I like anywhere there’s crab cakes,” he said. “In the summer I’m very fond of Maryland tomatoes and corn on the cob. So, if somebody here invites me to a restaurant, count me in.”
Also see:
Catholic War Veterans grow membership, students’ understanding
Pope leads prayers, calls for aid for those hit by deadly typhoon
PrevNext