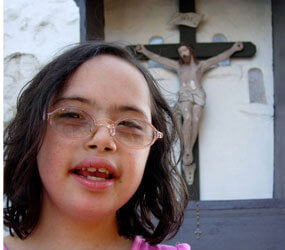 GILBERT, Ariz. – As a newspaper reporter, Sherry Boas made her living telling other people’s stories. Today, the home-schooling mother of four adopted children is telling her own.

Boas has written a trilogy of novels highlighting the innate value of every human person – a value others may not see at first.

Like her 9-year-old daughter, Teresa, the main character in the novels, Lily, has Down syndrome. Boas said the novels, which have been endorsed by Phoenix Bishop Thomas J. Olmsted and are being distributed by Catholic Word Publishing Group, send a strong pro-life message.

“Lily has Down syndrome and she ends up changing the lives of all the people who come to take care of her through the three books,” Boas said. “Her mother could have chosen not to have her, because 90 percent of Down syndrome pregnancies are terminated.”

Boas, who has also written a rosary meditation book, said the writing of the novels was rooted in her passion for the pro-life cause and her primary role as a mom.

“All of our children have been saved from abortion,” she said.

Her son, John, whose birth mother requested an abortion after finding out she was 24 weeks pregnant, was born a week later and weighed only a pound and a half. Boas had fasted and prayed for a new child to join their family. “Three days later, we got the call,” she said, crediting the intercession of Blessed Mother Teresa.

Boas also deems it miraculous that her daughter Teresa was not aborted, since she was conceived in rape and has Down syndrome.

“So many babies are aborted for either of those two reasons,” Boas said in an interview with The Catholic Sun, newspaper of the Phoenix Diocese. “But look what beauty this child has brought into the world.”

Boas said Mother Teresa has been instrumental in all her family’s adoptions. The revered founder of the Missionaries of Charity, who spent her life caring for the poorest of the poor, was well-known for her plea to those considering abortion.

“She said, ‘If anybody does not want their baby, bring your baby to me. I will take him. … There is no need for abortion, none.’“

Taking her cue from Mother Teresa, Boas said she told God to “send her a child that would have been aborted.” She said she and her husband didn’t sense a specific calling from God to adopt special-needs kids – they just wanted to say yes to his will for their lives.

“We said yes to that as if we were biologically giving birth to a child we would not be able to say no to,” Boas said. “It’s been surprising in some ways. It’s more joyful and more challenging than you think it’s going to be.”

Raising a child like Teresa, Boas said, “opens up a whole new world for you and makes you view life in a whole new way. … Having someone with special needs in your family reinforces how valuable every human soul is to God and to humanity.”

Boas said her trilogy illustrates the point that each person is born with a purpose. “Even if they’ll never talk, never smile,” she said, “they have a purpose. Life is a miracle.”

The trilogy – “Until Lily,” “Wherever Lily Goes” and “Life Entwined with Lily’s” – were originally self-published but will be launched by Catholic Word in January to coincide with pro-life activities during that month.

Boas set up a website, http://LilyTrilogy.com, to market the books and keep readers up to date on the series. While working on a new novel for publication next year, she also hopes to come up with a set of discussion questions for book groups on the trilogy.

“I think it would be great for a Catholic reading group to look at,” she said. “Lily ends up saving people on many levels.”