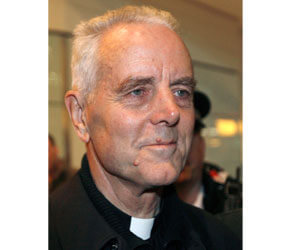 VATICAN CITY – The Society of St. Pius X threatened to expel traditionalist Bishop Richard Williamson if he retained an extremist lawyer with neo-Nazi ties to defend him in a German court.

The head of the traditionalist society, Bishop Bernard Fellay, “has formally ordered Bishop Williamson to abandon this decision and not allow himself to be manipulated by political ideas that are completely unrelated to his mission as a Catholic bishop serving the Society of St. Pius X,” said a recent communique.

“To disobey this order would result in Bishop Williamson being excluded from the Priestly Fraternity of St. Pius X,” said the statement signed Nov. 20 by the society’s secretary general, Father Christian Thouvenot.

The society expressed its concern that the British-born bishop had hired a lawyer “who is openly affiliated to the so-called neo-Nazi movement in Germany and other such groups.”

The British-born bishop is appealing a fine stemming from charges by a German court last year for Holocaust denial, which is illegal in Germany. According to German media, the lawyer, Wolfram Nahrath, is a member of the far-right National Democratic Party and had led a neo-Nazi youth organization that was eventually banned in 1994.

Bishop Williamson was one of four of the society’s bishops who were excommunicated for being ordained against papal orders in 1988; Pope Benedict lifted the excommunications in 2009.

The Vatican said it was unaware that days before the excommunications were lifted, Bishop Williamson had asserted in a televised interview that the Holocaust was exaggerated and that no Jews died in Nazi gas chambers.

In a new book, Pope Benedict said that if he had been aware of the bishop’s views on the Holocaust, then “the first step would have been to separate the Williamson case from the others.”

“Unfortunately, though, none of us went on the Internet to find out what sort of person we were dealing with,” he said in a book-length interview titled “Light of the World: The Pope, the Church and the Signs of the Times.” The book by Peter Seewald was scheduled for worldwide release Nov. 24.

Soon after the excommunications were lifted, the Vatican published a statement saying that Bishop Williamson would not be welcomed into full communion with the church unless he disavowed his remarks about the Holocaust and publicly apologized.

Though the bishop later issued a statement of regret for the scandal caused by his remarks, the Vatican said the statement did not meet its demand that he publicly and unequivocally recant his position.