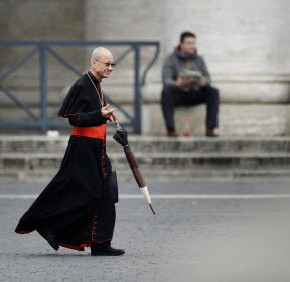 By Carol Zimmermann
Catholic News Service
VATICAN CITY – Everyone is curious about the cardinals.
As they arrive for their daily meetings or general congregations at the Vatican before the conclave, reporters and photographers are on the scene, often behind a barricade but sometimes literally chasing the cardinals with microphones and cameras.
Cardinals who get approached by the media are immediately flanked by Italian police officers. Other cardinals quietly slip through the crowd, choosing to avoid a main street and preferring to duck into a side street after walking across St. Peter’s Square.
Many are driven to the meeting and only visible to the crowd from the car windows. The cars are saluted by two Swiss Guards and allowed to enter the closed-off street.
On March 7, crowds assembled under the colonnade in St. Peter’s Square and even in the street – craning their necks and holding aloft cameras as cardinals approached.
All heads turned when someone in the group saw a cardinal walking toward them and pointed or said his name. They took pictures, waved and sometimes asked questions while greeting the prelates.
For the most part, the cardinals responded with a smile or wave, although a few passed by without even looking up. When one cardinal smiled at the crowd and said “good evening,” the group laughed and cheered.
Joanne and Victor Staniec, retired Catholic schoolteachers from St. Damien Parish in Ocean City, N.J., joined the crowd on the street immediately after getting off their tour bus in Rome.
The couple was very disappointed because they were scheduled to visit the Sistine Chapel March 8, but it was closed to the public March 5 while workers began preparing it for the conclave – installing floor panels, tables and chairs, the stoves to burn the ballots.
Victor said their tour group had already visited Venice, Florence and Pisa and said “nothing has been as hectic as this” pointing to the crowd on the street.
Joanne said that since she was young, she has wanted to see the Vatican and St. Peter’s Basilica in particular. To be at the Vatican at a historic time was exciting, she said, and the thought that the conclave might begin during their stay was even more thrilling.
“Maybe we’ll see the smoke” announcing a new pope, she said, but she added that it was unlikely to happen during their stay of a few days.
Also see:
Voting for new pope to begin March 12
Copyright (c) 2013 Catholic News Service/U.S. Conference of Catholic Bishops
PrevNext