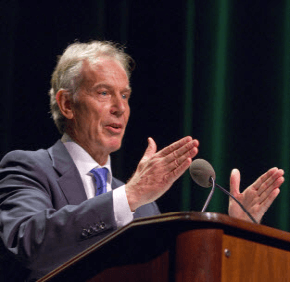 By Maria Wiering
mwiering@CatholicReview.org
Twitter: @ReviewWiering
Former Prime Minister of the United Kingdom Tony Blair addressed a packed Reitz Arena at Loyola University Maryland April 9 on the challenges of political leadership in the face of globalization.
“The challenges of political leadership today are probably as difficult – if not more so – than any point in time I can remember,” Blair said.
Blair’s presentation was the inaugural Hanway Lecture in Global Studies, supported by H. Edward Hanway, chairman of Loyola’s board of trustees and a 1974 graduate of the Baltimore university, and his wife, Ellen.
In a 20-minute lecture, Blair said the “chief characteristic of the world today in my view is the scope, the scale and the scheme of change.”
“Things are happening very fast,” he said. “Very often, the best short-term politics are in collision with the best long-term policies. The single toughest thing for leaders is to make sure they’re following the policies that are right for the long-term interests of the country rather than simply giving in to the pressures of the short-term politics.”
Blair, 59, reflected on the challenge of initiating structural reform and addressing multiple crises simultaneously. Blair served as prime minister from 1997 to 2007.
Blair spoke at Loyola a day after the death of the Baroness Margaret Thatcher, Britain’s prime minister from 1979 to 1990. He called Thatcher “a genuine and true defender of liberty.”
“There are very few political figures that end up not just changing the political landscape of their own country, but the world, and she did that,” he said. “I think it’s right that we mark her passing with great respect and pride.”
In a 30-minute question-and-answer session following his remarks, Blair responded to submitted audience queries on topics ranging from his efforts to resolve conflict between Israelites and Palestinians and reduce poverty in Africa, to the issues of climate change and international involvement in Syria. He also answered questions of a personal nature, including one on his conversion to Catholicism after he left office.
“It was coming a long time for me,” he said. Blair’s wife, Cherie, is Catholic, and the couple has raised their four children in the church.
He said he joined the church not for “great theological reasons,” but because it “felt like home.”
“One of the great things about the Catholic Church is that wherever you go, you went to Mass, it felt like being home in a sense,” he said.
Several times during his presentation Blair encouraged Loyola students to increase their understanding of global issues through travel and study.
Loyola launched an interdisciplinary global studies major seven years ago, and more than 100 students have participated in the program, Hanway said in his opening remarks.
Jesuit Father Brian Linnane, Loyola’s president, introduced the former prime minister, saying that the university “set the bar high” for the global studies lecture by inviting Blair to be the first speaker.
Also see:
Bishops offer prayers after death of Britain’s Margaret Thatcher
Copyright (c) April 10, 2013 CatholicReview.org
PrevNext