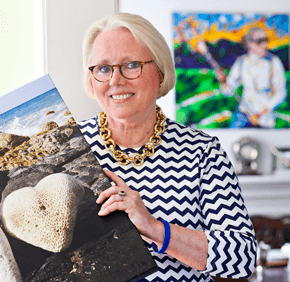 By Elizabeth Lowe
elowe@CatholicReview.org
Twitter: @ReviewLowe
COCKEYSVILLE – Sharon Love and her daughter, Lexie, planned to attend midday Mass May 3 at St. Vincent de Paul in Baltimore.
“It’s not a great day, let’s put it behind us,” the mother said. “The past three years have been fast. I can’t believe it’s been three years; at other times it seems like it’s been 30 years.”
On May 3, 2010, two weeks before Yeardley Love, her other daughter, was to graduate from the University of Virginia, the 22-year-old was found dead in her Charlottesville apartment.
Her ex-boyfriend, George Huguely V, 25, of Chevy Chase, was found guilty by a Virginia jury in February 2012 of second-degree murder and grand larceny in her death. According to court testimony, Huguely drank alcohol for more than 12 hours the day Love died.
Both were lacrosse players at Virginia. Yeardley also played the sport at Notre Dame Preparatory School in Towson, where she was a 2006 graduate.
Sharon Love, who worships at St. Joseph, Cockeysville, is quick to credit her faith with helping her get through the heartbreak of her loss.
“We leaned on our faith, that Yeardley was in heaven,” Love said, surrounded by photos of her daughters. “That gave us the strength. I don’t know what people do (who) don’t have faith.”
Huguely was sentenced in August 2012 to 23 years in prison. In late April, according to multiple news reports, the Virginia Court of Appeals granted a defense appeal on two arguments, that Huguely was denied right to counsel when the trial was forced to proceed despite one of his attorney’s being ill, and that the jury was not impartial.
“It doesn’t necessarily mean he’ll get a new trial,” Sharon Love said. “It’s been a long time. It will be nice when it’s finally over.”
Without uttering Huguely’s name, Love chooses not to focus on him.
“I try not to think about that,” she said.
One Love Foundation
The Love family has lived through tragedy before. In 2003, Sharon’s husband, John, died from prostate cancer.
“We have seen the worst of life and the best of life through others,” Love said. “People have been so nice.”
Within weeks of Yeardley’s death, the One Love Foundation was formed in her memory. The nonprofit – named after Yeardley’s jersey number and last name – works to end relationship violence through education and digital technology.
“It got us up and out of bed in the beginning,” said Love, a retired deaf education teacher in the Baltimore City Public Schools.
According to the Centers for Disease Control and Prevention, intimate partner violence (IPV), which includes physical, sexual or psychological harm to a partner or spouse, affects millions of Americans.
One in three women will experience IPV in her lifetime; one in five in college will experience IPV during her college career, according to information from One Love Foundation. IPV results in about 1,200 deaths and 2 million injuries among women annually in the United States.
The foundation’s free smartphone application, One Love Lite, is meant to help its target audience – young men and woman ages 16 to 24 – determine their level of relationship danger, even if they aren’t in a relationship and provide resources for help, Love said.
“That is where relationship violence is most prevalent,” said Love, who added this age group can be vulnerable and naive.
Preventing relationship violence before it begins is key, said Love who added “it’s crucial” friends of the abused and abuser intervene.
“We want to address the abusers, too,” Love said. “We’d like to see an attitude change.”
The foundation and its message are growing, from fundraising events to scholarships to educational programs.
“I’m shocked at how fast it’s come in such a short time,” Love said, who credits “help from above.”
She wants the foundation to be the national go-to resource for relationship violence. Through education, Love said, “the (foundation’s) goal is to cut domestic violence in half in five years.”
Teaching moment at Notre Dame Prep
At Notre Dame Prep, Love’s death “had two profound effects,” said Ginna Alderman, a Notre Dame Prep high school counselor who advised Yeardley when she was a student. “We are educators – what are we going to do about it? What can we do here to honor her?”
In spring 2011, about a year after Yeardley’s death, NDP staff members from various departments collaborated about how to incorporate discussions of healthy relationships and dating violence into the curriculum, specifically, for freshmen in guidance and health, freshman and seniors in religion classes, and for a senior history elective class.
“We make sure we cover it from A-Z,” said Alderman, who noted “we always did (teach) healthy relationships.”
Alderman shares with students the statistic that one in three will experience IPV, then asks the girls to count the number of people in the room.
“She (Yeardley) was (once) sitting there in the room,” Alderman said. “It’s tangible and real here.”
“When it hits home, it hits you between the eyes, it makes it so real,” said Christine Kaiser, NDP’s dean of students who taught Yeardley math her freshman year. “It makes the girls sit up and take notice.”
NDP has used Yeardley’s death as a purposeful way to teach students about healthy relationships, said Kaiser, who added “they can’t hear it enough.”
Last September, NDP dedicated its new artificial turf field in her name. Lines on Yeardley Reynolds Love Field are accented with two shades of blue, Love’s Class of 2006 colors at NDP.
“Love Field … it will be a way to keep it ever present in our minds at Notre Dame,” Kaiser said.
Of course, Yeardley will forever be on Sharon’s mind as she dedicates her time to the foundation.
“I’m sure she’d be thrilled people will benefit from her story,” Love said.
For more information, visit the One Love Foundation  and the National Domestic Violence Hotline.
Know an outstanding mom in your life? Tell us in 200 words or less why she deserves to win a Mother’s Day bouquet!
Copyright (c) May 3, 2013 CatholicReview.org
PrevNext