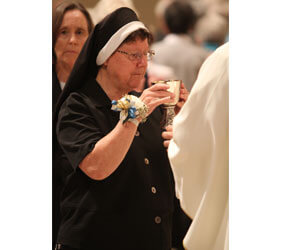 WASHINGTON – A three-year study of U.S. women religious called for by the Vatican has been completed with the final comprehensive report recently sent to Rome.
No details of the findings in what the church calls an apostolic visitation were released by Mother Mary Clare Millea, superior general of the Apostles of the Sacred Heart of Jesus and the apostolic visitator appointed by the Vatican to undertake the study.

Jesuit Father Federico Lombardi, Vatican spokesman, confirmed Jan. 10 that reports had been received by the Congregation for Institutes of Consecrated Life and Societies of Apostolic Life “and is now studying them.”

“At this time, it is premature to expect comments from the congregation,” he said.

The Vatican spokesman said the congregation is expected “to make known its evaluation of the results of the visit” at some future date.

The apostolic visitation office in Hamden, Conn., did not respond to several requests for an interview.

In a Jan. 9 press release, the visitation office said a comprehensive report was sent to Archbishop Joseph W. Tobin, the congregation’s secretary. In addition, the release said, Mother Clare had submitted most of the reports on each of the nearly 400 religious congregations in the U.S. and continues to work on completing them by spring, the release said.

Mother Clare said in the release that the visitation “generated widespread interest.”

“The attention to it has resulted in a renewed appreciation for the role of religious in the church and society and has increased dialogue and mutual awareness among the various communities in the United States,” she said. “These tangible benefits of the visitation will continue to be realized.”

The visitation was initiated in December 2008 by Cardinal Franc Rode, then prefect of the congregation who has since retired. He cited the desire to learn why the number of members in U.S. religious communities had declined since the late 1960s and to look at the quality of life for some 67,000 women religious as prime reasons for the investigation.

As the process began, the Leadership Conference of Women Religious, which represents about 95 percent of U.S. women religious, questioned what its officials considered a lack of full disclosure about what motivated the visitation. They also objected to the plan to keep the orders from seeing the final reports.

The decision to conduction the visitation, combined with the subsequent announcement that the LCWR would undergo a doctrinal assessment by the Congregation for the Doctrine of the Faith, cast a shadow over the work of women religious.

As the apostolic visitation and doctrinal assessment were carried out, both were conducted with little formal comment from the parties involved. Privately, however, some sisters and leaders of religious orders questioned why the two inquiries were being undertaken and they expressed concern that their ministries, often among people on the margins of society, were being misunderstood by church leaders.

Cardinal Rode subsequently said in a statement released by the Vatican that he hoped the visitation process would encourage vocations and “assure a better future for women religious.”

In an interview on Vatican Radio after the statement’s release, Cardinal Rode said some media presented the investigation “as if it were an act of mistrust of American female religious congregations or as if it were a global criticism of their work. It is not.”

Cardinal Rode also asked the U.S. Conference of Catholic Bishops to help cover the cost of the visitation, which was estimated at $1 million.

The visitation process began with meetings between Mother Clare and 127 superior generals. It was followed up with the distribution of a questionnaire to the religious orders. Topics covered were related to the life and operation of the orders: identity; governance; vocation promotion, admission and formation policies; spiritual life and common life; mission and ministry; and finances.

Once the information was collected and compiled, teams of visitors fanned across the country throughout 2010 to meet with congregational leaders as well as individual members of religious orders. About 90 congregations were visited by dozens of volunteers.

Archbishop Tobin, an American, became congregation secretary in October 2010. He told Catholic News Service last August that the congregation would review all of the visitation reports when received and that its responses to the participating religious communities would be marked by dialogue and would be a step toward healing.

Bishop Leonard P. Blair of Toledo, Ohio, was appointed apostolic visitator for the assessment of LCWR. He completed his report in July 2010.

Sister Annmarie Sanders, LCWR director of communications, told CNS in late December that the last contact the organization had with Vatican officials occurred when its leadership team made its annual visit to Rome April 27-May 4.

“They (the team) were informed that the congregation had no new questions,” said Sister Annmarie, a member of the Sisters, Servants of the Immaculate Heart of Mary. “That’s the last communication we’ve had.”